This week's subject is the looming referendum on whether or not Britain will leave the European Union. I was asked by the team at Investing.com to draw David Cameron driving a British-style double-decker bus (colored like the Union Jack) up to a fork in the road. The two forks would be labeled "Brexit" on one side and "EU" on the other. The bus would be just beginning to turn onto the "EU" side of the fork (a reference to the fact that poll numbers seem to indicate a slight lead for the "remain" side). Standing at a bus stop on the "Brexit" side of the fork would be Boris Johnson (former mayor of London and the leader of the "Leave" side), waving as if to signal to the driver that he's been missed. 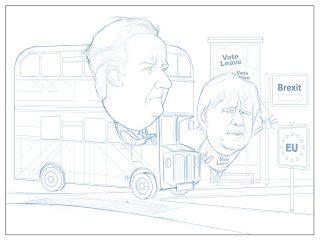 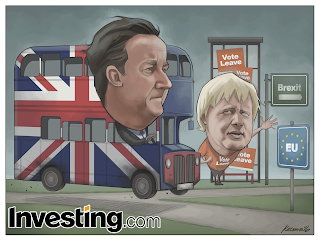 Thoughts: Another tough comic this week. Although it's only two characters, the bus added a decent amount of complexity. But it was fun, nonetheless. I don't usually like drawing cars, but the double decker bus is basically just a box. And I always like drawing dirt and grime on stuff. Plus, Cameron and Johnson have pretty expressive faces. Boris Johnson looks a little to me like the albino in "The Princess Bride".

All in all, not a bad comic.