Here's the latest comic for Investing.com. This week's topic is the hawkish position taken by several officials at the Federal Reserve.

The team at Investing.com asked me to draw Janet Yellen (dressed as a bird keeper) standing on the lawn in front of the Federal Reserve Building and behind the Fed podium. On both hands, Yellen would have a hawk: one with the head of Stanley Fischer and the other with the head of William Dudley. In the background, I was asked to include three more hawks flying overhead with the names Harker, Bullard, and Kashkari. 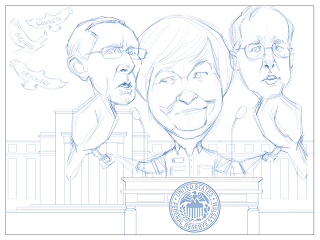 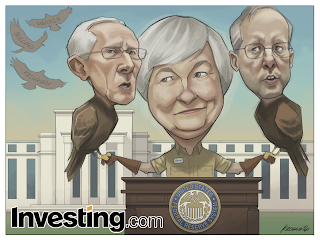 This one wasn't exactly a cake walk. Three characters is a lot for a one-day turnaround. I probably could have re-used older drawings of both Fischer and Yellen, but I decided to draw them from scratch. I guess I wanted the challenge. And I think it turned out pretty well. The composition isn't amazing, but I think the colors are strong and the caricatures are good.

That's about as much as I can ask for.