Here's the latest financial comic for Investing.com. This week's subject is volatility in the currency markets and a concerted effort by multiple governments to devalue their own currencies.

The crew at Investing.com asked me to draw a steep downhill track. Racing on that track would be China President Xi Jinping, Reserve Bank of Australia Governor Glenn Stevens, EU President Mario Draghi, and Bank of Japan Governor Haruhiko Kuroda. They were to be racing toward a finish line reading "Bottom" and in the afore-mentioned order. I was also asked to draw a weight attached to Kuroda's leg, symbolizing the G7 decision that has hamstrung Japan's currency control efforts. This, it should be noted, was all explained to me. I'm not this well-informed on monetary news in real life. 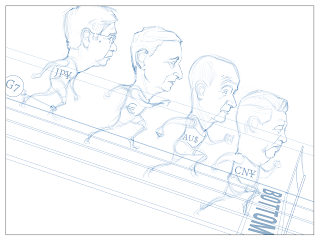 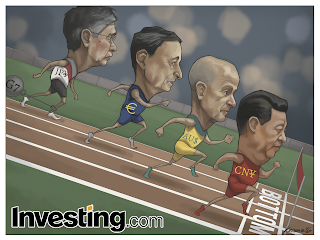 I'm pretty happy with the caricatures and the face shading on this one. I think they all look pretty solid and I think Stevens looks particularly good. I feel so so about the composition. The slanted track and the number of characters (and my decision to use a profile view of the scene) necessitated smaller-sized characters than I would have preferred.

I'm not thrilled about the big, green field. It seems a little too simple, but with four caricatures I didn't have time for anything too elaborate. Even re-using a background from an old comic, this puppy took me 11 hours. Overall: Hard work, but I think it's a solid result.