The festival, which is held every year on the University of Idaho campus, brings together students and professional jazz musicians from all over the world for a week of workshops and concerts. I've gone to the concerts just about every year for the last decade or so and have loved jazz (in a super-uneducated way) for much longer. So it was an honor and a thrill for me to be asked to create the commemorative poster (which is different from the advertising/informational posters in that it has a little more room to be expressive).

The first thing we did was meet and talk about past posters, the theme of this year's festival, the goals of the poster, and a potpourri of other related things. They made it clear to me that, as the artist, I pretty much had carte blanche on this.

So I went away and gave it some thought. Jazz is so broad and has so many iterations, meanings, and is influential in so many ways, I figured out pretty quickly that to try to distill ALL of jazz into a single poster would be a fool's errand.

So I narrowed my focus a bit and came up with a set of concepts: 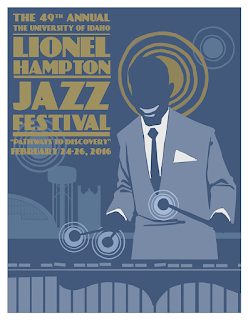 Two of the concepts (along with many of the past festival posters) focus on the festival's namesake, Lionel Hampton, who was an incredible vibraphone player and composer. In this concept, I tried to capture some of Hamp's energetic spirit in a vintage jazz poster style. 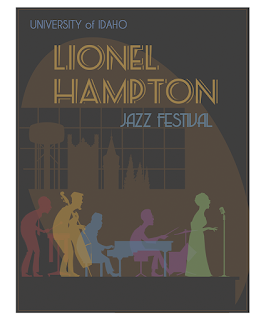 This concept focuses on some of the other titans of jazz and the profound influence they've had on the genre: Lionel Hampton, Thelonius Monk, Art Tatum, Max Roach, and Dinah Washington. There's also a wink to the UI campus in the background. 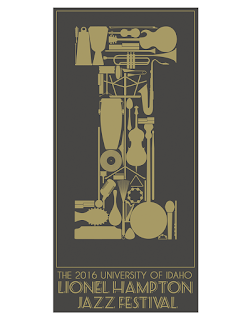 This is an approach I've done several times before. It's labor intensive, but I think it's a solid metaphor: The festival is a diverse collection of musicians and styles, brought together by the University of Idaho (that "I" is one of the main UI graphics. 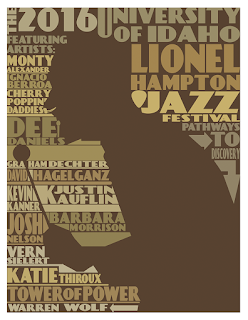 Finally, in a fit of inspiration (the kind that I can usually only get to once I've ruminated on a topic for weeks), I tried a slightly different version of the same "collage" idea, only this time with words. The silhouette in the middle is Lionel Hampton. I've never actually done a word design like this before, but I thought it was a neat idea and that it somehow captured some of the vibrancy of jazz.

The last concept was my favorite, and I was hoping it would be the one chosen, though I would have happily turned any one of the concepts into the final poster. As it happens, they liked the same one. So, after some revisions and fine tuning, the final product came out like this: 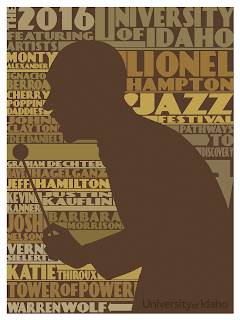 I said it earlier, but it's worth repeating: Being asked to create this year's festival poster was a genuine honor. I was glad to contribute in my own small way.