Here's the most recent comic for Investing.com. This week's comic deals with recent negotiations between Russia, Saudi Arabia, and Iran over oil output levels.

The crew at Investing.com asked me to draw a WWE-style wrestling ring. In it, they asked me to draw Saudi King Salman holding Iranian President Rouhani while President Vladimir Putin punches him. This is a metaphor for the pressure being brought to bear on Iran regarding their output levels. At least, I'm pretty sure it's a metaphor. I'm just an illustrator, and as such, I'm rarely invited to attend OPEC meetings. I was also asked to include some Sheikh-type characters cheering in the foreground. 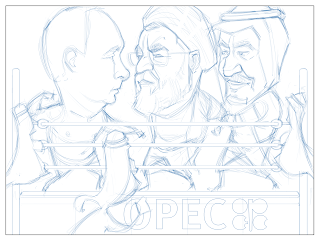 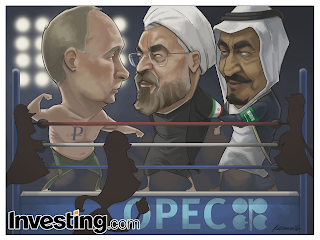 This comic was a beast. By which I mean a lotta work. Three caricatures plus setting plus people in the foreground, minimal though they may be. That's a lot to do in one day. It took about 11 hours.

Overall, I think it came out well. I hadn't felt great about the last two comics. They weren't awful, but they weren't strong either. So I wanted to have a better showing this week. Candidly, I get paid the same amount whether or not the drawings are good. But I'm a very competitive person when it comes to my work. I'm always trying to improve, if only marginally. And it irks me when I work hard on a comic and it doesn't come out looking all that great.

Not so great parts: This isn't a super strong composition; everything's just kind of crammed in. And the guys in the foreground are way too small. Being in the f.g., they should be larger. But that would also mean they would block more of the action behind them. It was a deliberate choice.

On the Up Side: I think all three caricatures came out pretty well. And that's a big part of the battle. I also like the stadium lights behind Putin's head. I wasn't asked to add it, but I think it's a nice touch.

Long story long, I think this is a solid comic.