Here's the latest comic for Investing.com. This week's subject is the recent talk of the UK leaving the European Union.

The team at Investing.com asked me to draw London Mayor Boris Johnson (who said recently he would support the UK leaving the EU) and Prime Minister David Cameron (who wants the UK to remain in the EU) standing on top of a Union Jack-colored UK as it begins to float away from Europe. They asked me to draw Cameron holding on to a rope tied to mainland Europe while Boris Johnson puts his hand in Cameron's face and attempts to cut said rope. 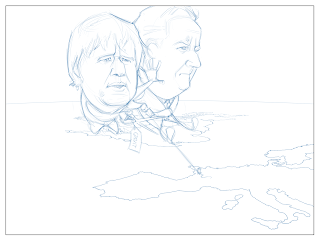 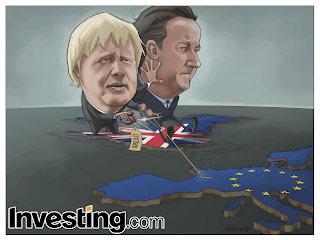 This comic was a tough one in terms of composition. I originally wanted Cameron, Johnson, and the UK in the foreground so they'd all be bigger. But doing so would have necessitated the countries being drawn upside down. I chose to draw them all right side up for the sake of clarity, although I still had to change the perspective to make it look halfway believable. The result is some oddly-shaped countries, but I think it still conveys the message.

Ok, I would reflect more, but I'm pressed for time. Overall, I think this is a decent comic.