Here's the latest comic for Investing.com. This week's subject is Federal Reserve Chair Janet Yellen's semi-annual monetary policy testimony before Congress. The issue at the heart of the comic is whether or not Yellen's testimony will sooth the markets, which have been turbulent of late.

I was asked by the crew at Investing.com to draw a kindergarten/preschool classroom wherein Yellen is offering candy and being reassuring (patting it on the back) to a baby bull in a green t-shirt while a larger baby bear glowers in the background. 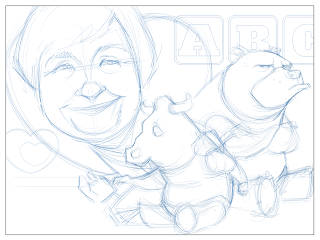 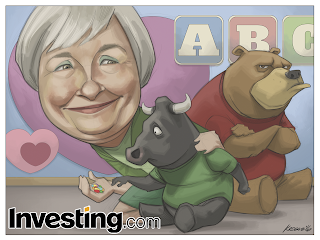 Not too much to say about this one. I sketched Yellen first, then drew the bear and the bull. Then I circled back and re-drew Yellen because the original version was crummy. Sometimes it takes me a while to warm up. I also changed the color of the back wall from yellow to blue at the last minute. It seemed like the yellow was competing too much for foreground attention.

The likeness of Yellen seems serviceable, but I don't think it's my best attempt. I also think the bear looks a little weird for some reason, but I couldn't figure out why. Maybe his face is oddly shaped or proportioned? If I could have figured out why he looked off, I would have changed it, but I could never put my finger on it.

I've had SO much practice drawing both Yellen and bears. You'd think after all this time that it would be a cinch and that I could draw them without thinking or trying. Well, you might not think that, but I would. And I would, apparently, be wrong.