Like that scene in "The Revenant", except with gloabl markets.

Here's the latest financial comic for Investing.com. This week's subject is another installment in the bear market series (see also: Xi Jinping riding a bear toward Wall Street). Stocks continue their downward trend due at least in part to sliding oil prices and softening foreign markets.

For this week's comic, the team at Investing.com asked me to draw a massive bear in a river eating bulls. They asked that the bear be wearing a shirt reading "I'm Back". In addition to that, they asked for multiple bulls to be in the bear's mouth, paw, and swimming in the river. Finally, they also wanted the water to show signs of the metaphorical carnage. 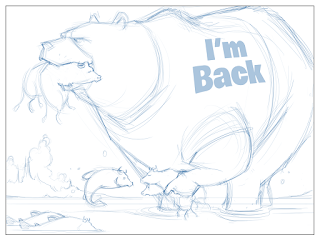 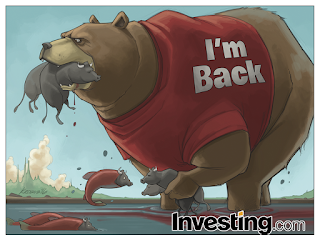 I have mixed feelings about this comic. Overall, I think it turned out well enough. But I also think I should have done a better job. Bears are usually easy and fun for me to draw, but for some reason I had a bit of trouble this time around.

I've also been experimenting with more dramatic lighting and I think the results in this comic are, again, mixed. Could have been better. For years I've pretty much only been drawing these comics with a light source that's directly overhead (mostly for the sake of time and my own sanity). But now I'm getting more interested in the drama and weight you can add just by changing the light source. In this case, I think it was a good try, but it fell a bit short. But it's a start, anyway.

Overall, I'd give this comic two cherries and a bar.

Cheers.
Posted by Noah Kroese at 9:30 AM