Maybe it's just too early in the game.
But I thought I'd ask you just the same.
What are you doing New Year's?
New Year's Eve?

This week's subject is sort of a general-theme reprise of a comic I drew for Investing.com in August of 2014. The original featured Janet Yellen and Ben Bernanke and was about the S & P 500 index closing above 2000 for the first time.

This time around, the crew at Investing.com asked me to replace Ben Bernanke with Angela Merkel. They also asked that Merkel be wearing a sash that read "Person of the Year", in regards to the fact that she is (at least, according to "Time").

Everything else was pretty much the same. Of course, I re-drew all of it anyway. I suppose I could have re-used some or even most of the elements from the original, but I try not to do that too often. I pretty much only resort to re-using a drawing or part of a drawing when I'm super pressed for time. 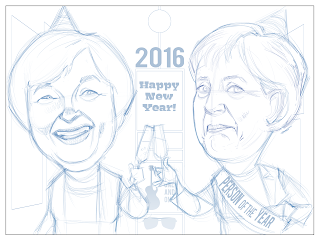 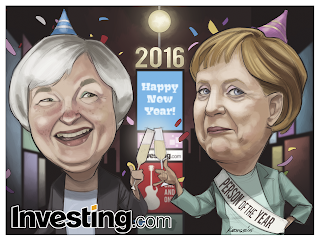 Whelp, that's the last comic for this year.

Also, just an FYI: I know I've pretty much only posted Investing.com comics for several weeks now, but I promise I'll post some different work soon. Some of these projects are in progress and some of them I just haven't had the time to share. But they'll be up soon.

Cheers.
Posted by Noah Kroese at 9:30 AM