Here's the freshest financial comic for Investing.com you're likely to read this week! This time around, the subject is Apple earnings, which fell short of analyst expectations, likely due to flagging consumer demand for Apple products in China.

The team at Investing.com asked me to draw China's President Xi Jinping at an Apple store. He was to be standing beside a display table shoving a handful of Apple's primary products into a trashcan. 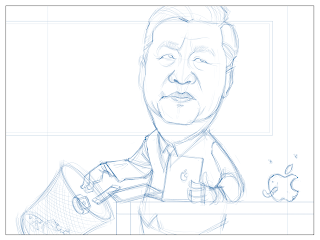 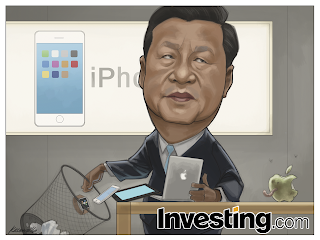 Because there were fewer elements in this comic than in the past few weeks (one character with a fairly straightforward background), I was able to spend a little more time composing this one. The result is, uncharacteristically, that I actually like the composition of this comic. Usually, these comics are such a mad dash that I can't really stop to consider the layout as much as I'd like; it's all I can do to finish it before the proverbial bell rings.

I also tried to give Xi Jinping a bit more expression than usual. Xi Jinping has a fairly inscrutable face. At least in photos, I've rarely seen him have much of any kind of expression at all. Like Putin, I think it actually makes his face even more expressive somehow. But this time around, I thought I'd draw him rolling his eyes, which maybe has never happened ever.

Overall, this one was all kinds of fun to draw.