Here's the first comic of 2016 for Investing.com.

This week's subject is the initial plunge in world markets on the first day of trading in 2016. Stocks traded sharply lower based ostensibly on slowed growth projections in China and on low oil prices. 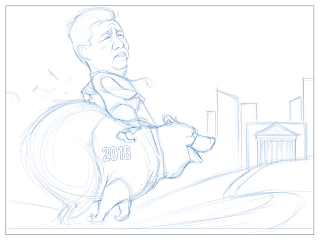 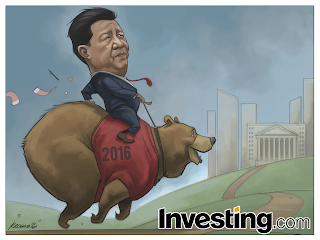 Fun comic this week. The subject was fun (I mean, Xi Jinping riding a happy bear? SWEET.). It was also fairly straightforward. Because it was just two characters and a fairly simple background (as opposed to a multiple-character comic where I have to scramble from start to finish), I got to spend more time on shading and color choice. I thought a moody sky, possibly just pre-storm would look good and fit the bill for the subject.

I also had a great time not only drawing Xi Jinping and the bear, but coloring and shading them. I'm still having fun with the more "painterly" technique. Me thinks I'll keep going with it.

Good times all around.