Here's the latest comic for Investing.com. There was a bit of a hiatus because of Thanksgiving, but I was back in the saddle this week. Unfortunately, during the week-long break, I seem to have forgotten how to ride a horse, so it was a rough and unpleasant ride.

The crew at Investing.com asked me to draw a comic about the diverging monetary policies of the US Federal Reserve and the European Central Bank. They asked me to include the following:

-Janet Yellen and Mario Draghi driving away from each other via a fork in the road.
-Janet Yellen in a truck with American flag colors.
-Mario Draghi in a BMW with the ECB logo on the side.
-Road signs that indicate the diverging policies (and are also based on the road sign designs of their respective country's origin)

Overall, pretty straightforward. But the big problem for me is that I was asked to draw cars, which are my Achilles' heal. That's misleading, because it suggests I have only one weakness when it comes to drawing. I actually have many. So I guess it's more like my Achilles' finger or something. But cars are at the top of the list. I find them difficult and tedious to draw.

The other tough part was figuring out a composition and layout that would work. I was asked to draw Yellen and Draghi. No big deal. I've drawn both scores of times before. But I was asked to draw them driving away from each other. Ok, still no big deal. I could theoretically draw them driving toward the "camera" (viewer) and still be able to show their faces and their vehicles. But that perspective gets ruled out when the detail of the road signs gets added in. The signs needed to be legible and that rules out the perspective where they're driving toward the camera.

I had to consider all these factors and all my options for potential solutions very quickly, because I have to begin drawing the comic first thing in the morning if I'm going to make the end of the day deadline. So here's the layout I settled on: 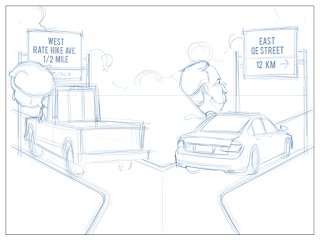 It seemed like the best option for the factors involved. I figured I had to choose between showing Yellen and Draghi's faces at a more recognizable angle OR drawing the road signs in a way that was legible and made sense. Given more time, I might have come up with a different solution that was a better fit, but I didn't have the luxury of time.

The drawbacks to this layout were chiefly that Yellen and Draghi are seen from the back (and are subsequently less recognizable) and, even more difficult for me, I was drawing two different cars at two different, odd angles. A car under the best of circumstances isn't easy for me. Two cars at 3/4-ish angles is grueling.

Here's how the final turned out: 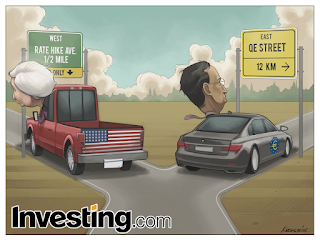 I do not like how I drew this comic. Not one bit. In my defense, I did the best I could in the amount of time I had. Also, this would have been a tough comic no matter how confident or warmed up I felt. However, I can't say this one is going into the portfolio. It combined a lot of my weaknesses into a single comic and I think the final product shows it.

Some comics turn out great and I feel good about them when they're done and, in turn, good about myself. This weren't one of 'em.