Here's the latest comic for Investing.com. It came a day early this week, which meant some last-minute schedule reshuffling and a little more of a mad-dash feel, but otherwise it was a fairly straightforward comic.

The subject this week is the Federal Reserve meeting tomorrow (I'm writing this Tuesday but it won't post until Thursday) wherein Janet Yellen is finally expected to announce that the Fed intends to raise interest rates for the first time in six years or so.

The crew at Investing.com asked me to draw a fancy, Oscar-like theater, in front of which Former Fed Chair Ben Bernanke hands current Chair Janet Yellen an Oscar-like award with the projected interest rate numbers on it. 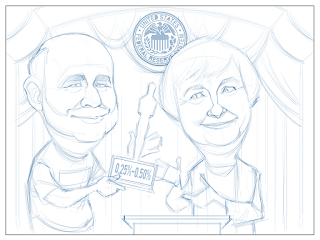 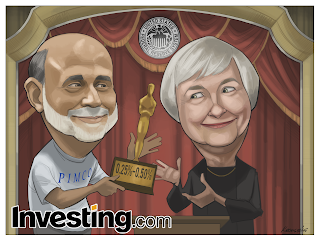 Post-Game Commentary: Because the comic was a day early and I felt even more rushed than usual, I can't say this is my best work. However, I think it's serviceable. And somehow, even after SO many financial comics and SO many times drawing both Bernanke and Yellen, it's still kinda fun. Shading their faces in particular is still interesting to me. Granted, I think it has something to do with my experiments with a more loose style, but still. That's something to be thankful for.