Here is this week's comic for Investing.com. The subject this week is the recent attacks in France and the potential effects that tragedy may have on the economy.

I was asked by the team at Investing.com to draw German Chancellor Angela Merkel and French President Francios Hollande, dressed in the soccer uniforms of their countries, standing in an empty soccer stadium with police behind them. Here's the sketch: 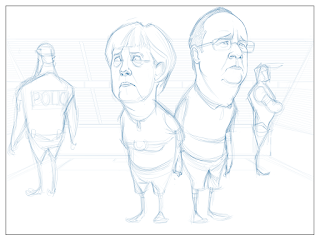 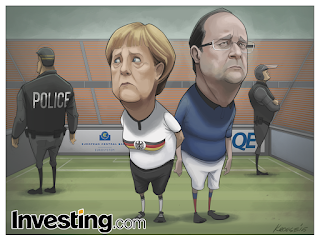 These are strange times. My heart goes out to the people of France.

Here's the latest comic for Investing.com. This week's topic is the upcoming rise in interest rates (set for December). The crew at Investing.com asked me to draw Janet Yellen climbing a set of stairs to board a space shuttle with the interest rate increment inscribed on the side. They also asked me to add Federal Reserve Vice Chairman Stanley Fischer (looking serious and holding a clipboard) and a second general worker doing general worker-type stuff. 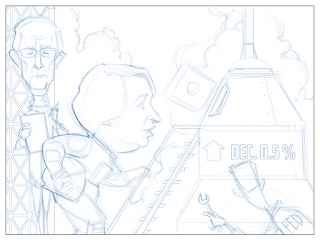 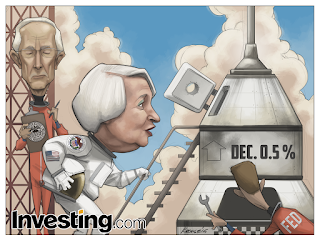 Not too much to say about this one. I'm continuing my exploration of a more loose style and techniques, which has been fun. It's made drawing exciting and interesting again. I'm pretty satisfied with the result of the comic this week.

So I got that goin' for me.

The good folks at Investing.com asked me to draw a two-panel comic. In the first panel I was asked to draw a VW bug (2015) spewing a cloud of exhaust while driving through an environment ravaged by global warming. The second panel was to show a Tesla Model S driving through a bucolic scene with blue skies and green hills. 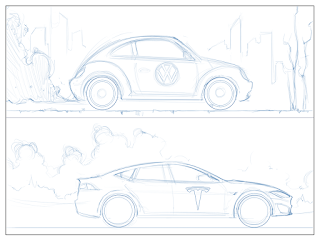 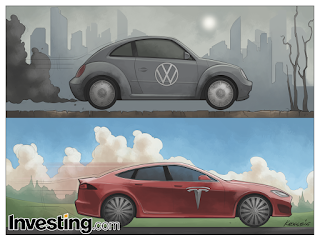 I decided to draw the cars from the side (a 3/4 view is harder and more time-intensive and a front view makes it harder to easily distinguish the car models). Because of that choice, it made more sense to split the cartoon horizontally rather than vertically.

Drawing the two divergent backgrounds and moods was super fun. Having this kind of variety in a comic is always challenging, but also interesting. Two-panel cartoons are more work for sure, but they're just more interesting to draw. I didn't even mind drawing the cars this time (they're usually difficult and frustrating subjects for me), but this time it was manageable.

Finally, I'm continuing my efforts to loosen up my style: visible sketch lines, various line weights, and visible brush strokes. Things aren't as carefully drawn, and I think the result is less stodgy and more energetic. But it's a work in progress.

Cheers.
Posted by Noah Kroese at 9:30 AM No comments:

Financial comic: The Quick and the Deadline.

Here's a comic I did earlier this week for a company out of Chicago. They needed a fairly fast turnaround time. I'm no stranger to short deadlines, but this one was tough to meet. I ended up having to really scramble at the end. 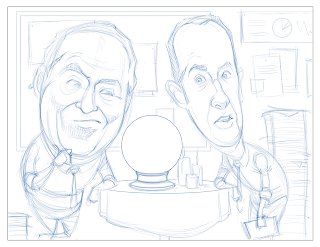 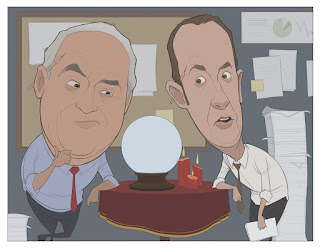 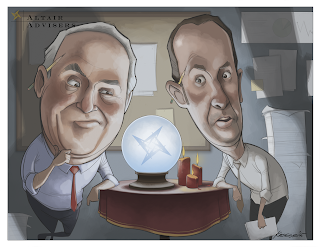 I've probably mentioned this before, but one of the benefits of working really fast is that I don't have enough time to be precious about the drawing. I have to run pretty much on instinct instead of overthinking every line the way I normally do when I have all the time in the world. The result is, in my opinion, much better. It ends up having more energy and life. The lines aren't so stiff, the color isn't so uptight. It breathes a bit more.

This general loosening up is something I'm trying to incorporate into all my work now. I'm trying to keep some of the energy of the sketch in the final piece. I'm trying to be more expressive and not hide my techniques as much. You can see this in the brush strokes on the faces, particularly the face on the right.

So far, I like how it's working. I think I'll stick with it.

Here's a poster I did for some friends several weeks ago. It's based on some of the horror comic/pulp cover illustrations of the 70s and 80s. 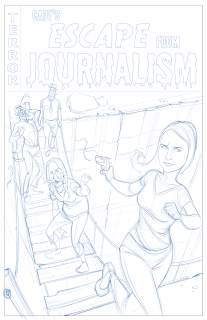 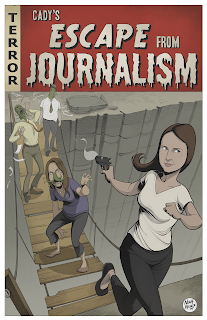 Posted by Noah Kroese at 5:34 PM No comments: