Here's the latest comic for Investing.com. This week's topic is the recent massive earnings posted by the large tech companies and the subsequent record rise in the NASDAQ index.

The good folks at Investing.com asked me to draw the Nasdaq building at night. At the base of the building, holding it up, they asked me to draw Tim Cook, Sergey Brin, and Mark Zuckerberg (super bulked up and swol with muscles, bro).

And here it is: 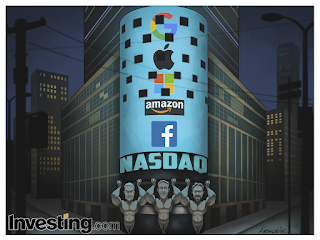 This was a tough comic for me. Buildings aren't my strong suit. I prefer organic subjects. I suppose it's partially because I think they're more interesting and partially because it's easy for buildings to look bad in an illustration. Plus, drawing a city (or even a small section of a city) is a huge amount of work. There's so much detail and energy (reflections, cars, people, etc) that drawing it convincingly would have taken me a week. As it was, I had a day.

I was asked to draw a specific building at a specific angle at a specific time. I did my best to do a serviceable job of it. But given the time, the streets had to stay empty of cars and people, and I had to leave out the various neon signs and screens and other light sources you would normally see in a scene like this. I think the result is a little lifeless. An empty street looks strange, like something out of Omega Man.

I decided to draw the three tech amigos as statues. There's a pretty big historical/architectural precedent for ornamental stone columns in the shape of swol' dudes. Also, it's about all I had time for. And even then, it was a mad dash from start to finish.

-The lighting is pretty dramatic. There's a lot of contrast and I think I captured the glow of the screen pretty well. I also like the lighting on the figures/statues.

-The foreground elements (telephone, lamp and sign posts, wires): This is something I haven't done before (that I can remember). I wanted to fill some of that space left empty by the details I had to leave out and (hopefully) create a little more of that cluttered energy that you see in big cities. This was my spur-of-the-moment solution. I think it works, to a point.

Not my strongest subject matter and not much time to work with. The result is maybe a C+ comic. But then, I always critique my comics more harshly right after the fact. I was looking through a stack of old comics recently. I can remember absolutely hating some of them. But after some time and distance I though, "Well, these aren't as bad as I remember."