Here's the latest financial comic for Investing.com. The subject this week is the continuing turmoil in the Chinese economy. China recently de-valued the Yuan and has been injecting massive amounts of money into the market in order to help stabilize the economy. In the meantime, economies around the world are bracing for the impact of these events.

The crew at Investing.com asked me to draw the following:

-Chinese President Xi Jinping and Federal Reserve Chair Janet Yellen riding in a roller coaster car.
-Yellen shielding herself against Xi Jinping while he throws money at the dragon.
-Said roller coaster car containing said VIPs on the precipice of a steep decline in the coaster's track.
-A Chinese-style dragon breathing fire around the car/coaster.
-Yuans being burned in the fire of the dragon. 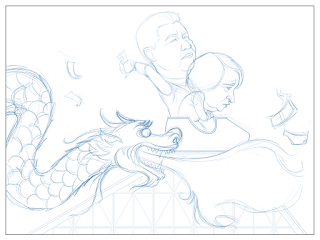 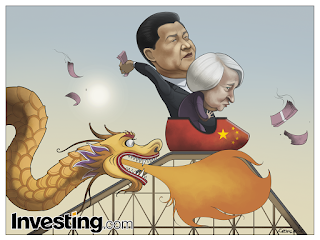 Post-game commentary: This comic was fun on a bun. I've drawn Xi Jinping several times in as many weeks and I'm starting to enjoy it. His face manages to be expressive and inscrutable simultaneously. Kind of like Putin. Plus, I got to draw a dragon, which is rad. Seriously, this is my job. What's not to love about that?

I don't love the flame. It's a little too stylized. Not that everything in the comic isn't stylized, but I don't think the flame necessarily matches the style of the rest of the comic. And I probably should have added more money to drive the point home. And possibly put some money in the foreground to give the piece a bit more depth.

BUT: I'm happy with the caricatures, I think the dragon turned out nicely, and I really like the sky. I was going for the hazy, smoggy look of Beijing. Living in the Northwest during fire season, I can relate. You can look directly at the sun in the middle of the day.