Investing.com: Burnin' down the (ware)house

Here's the latest comic for Investing.com. This week's subject is a massive sell-off in the commodities markets due in part to recent events in Iran and China. Commodities prices have dropped to 10-year lows.

The good folks at Investing.com asked me to draw a warehouse full of various commodities (silver, gold, platinum, copper and iron ore). Somewhere nearby, they asked me to draw Ayatollah Ali Khamenei pouring out a barrel of oil while China's Xi Jinping lights the stream of oil on fire. The flaming stream of oil was to lead to the commodities warehouse, where part of the warehouse would also be on fire. 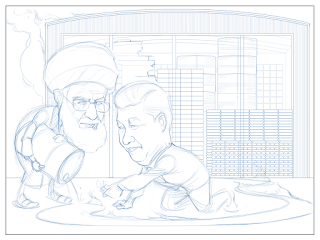 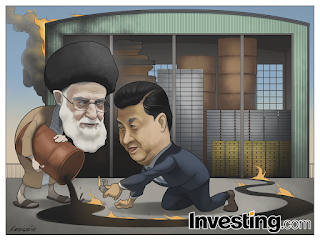 This week's comic was a ton of work. Two characters wasn't the problem, it was the warehouse of commodities. It was still pretty fun to draw, but this one took me longer than usual. For the most part, I think it came out fairly well. I don't think the shading on Xi Jinping is great, and for some reason I think the sketch is a better likeness than the finished version. Also, I think the shading on the warehouse items is a bit off (the edges aren't terribly convincing).

But the likenesses are pretty good, the posing is better than usual (there's more "acting"), and the composition is decent. Overall, I think this comic is a moderate success. Not a runaway success, but it's serviceable.