Investing.com: Of Bonds and Ennui

The Subject: Global bond markets have been seeing some volatility as of late (ditto emerging market currencies) primarily because of speculation that the Federal Reserve is going to raise interest rates in September.


The Pitch: The team at Investing.com asked me to draw Federal Reserve Chair Janet Yellen pushing over a stack of dominoes. The dominoes, representing various bond markets in various countries, were to feature the flags of China, Germany, Russia, Turkey and Japan. I was also asked to draw a crowd behind Yellen, some of whom were holding signs reading "1%" and "2%". 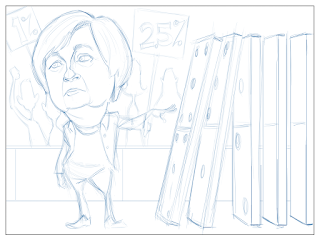 I did my best to capture an expression of casualness bordering on boredom on Yellen's face. Not that I'm suggesting she executes her job with either frame of mind. Instead, I meant her expression to convey the massive amount of power yielded by Yellen in her capacity as head of the Fed. Even an offhand comment by Yellen can make markets fluctuate dramatically, so imagine the influence of a calculated statement. Fed heads tend to be purposefully disaffected for this very reason, which is why it's so refreshing that Yellen actually has a very expressive face (refreshing from an illustrator's standpoint, anyway. 'Cause it's fun to draw.) 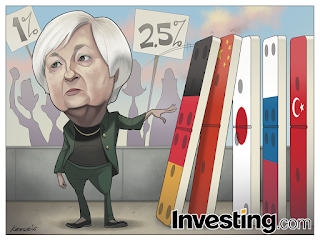 While out on a walk the evening before I drew this comic, I saw some pretty, wispy evening clouds. So I included them in this comic. Otherwise, the rest (shading and finishing) was standard fare. Still fun, though.

Overall, I'd say this was a fairly strong comic. I'm happy with the technical aspects (not entirely, of course, the composition could have been stronger) and it was fun and interesting to draw. Can't ask for much more than that.