Here's the latest comic for Investing.com. The subject is the recent rise in major global exchanges in anticipation of possible central bank stimulus.

The team at Investing.com asked me to draw Fed Chair Janet Yellen, ECB President Mario Draghi and Bank of Japan Governor Haruhiko Kuroda as street performing puppeteers. Instead of puppets, however, each was to be "controlling" mini-versions of their country's stock exchanges. In the background, I was asked to draw Ben Bernanke in a helicopter raining money down upon the trio. 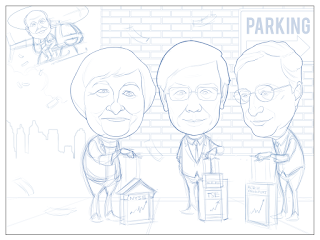 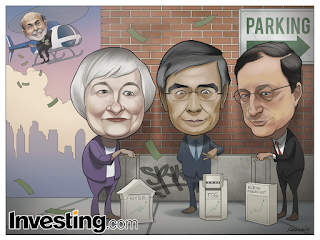 Tough comic this week because of the complexity, so I can't say I'm completely satisfied with the result. But there are a couple of details I like (the graffiti in the background, the sign, the color of the sky and the background buildings). It's the little things, as they say.