Here's the latest comic for Investing.com.  This week's subject is the falling value of the Yen.  I was asked by the good folks at Investing.com to draw Japanese Prime Minister Shinzo Abe and Bank of Japan President Haruhiko Kuroda hiking up Mt. Fuji.  Behind them, an anthropomorphized Yen symbol was to be hanging precariously from the edge.  I was also asked to include some cherry blossoms and possibly a pagoda for further geographical reinforcement. 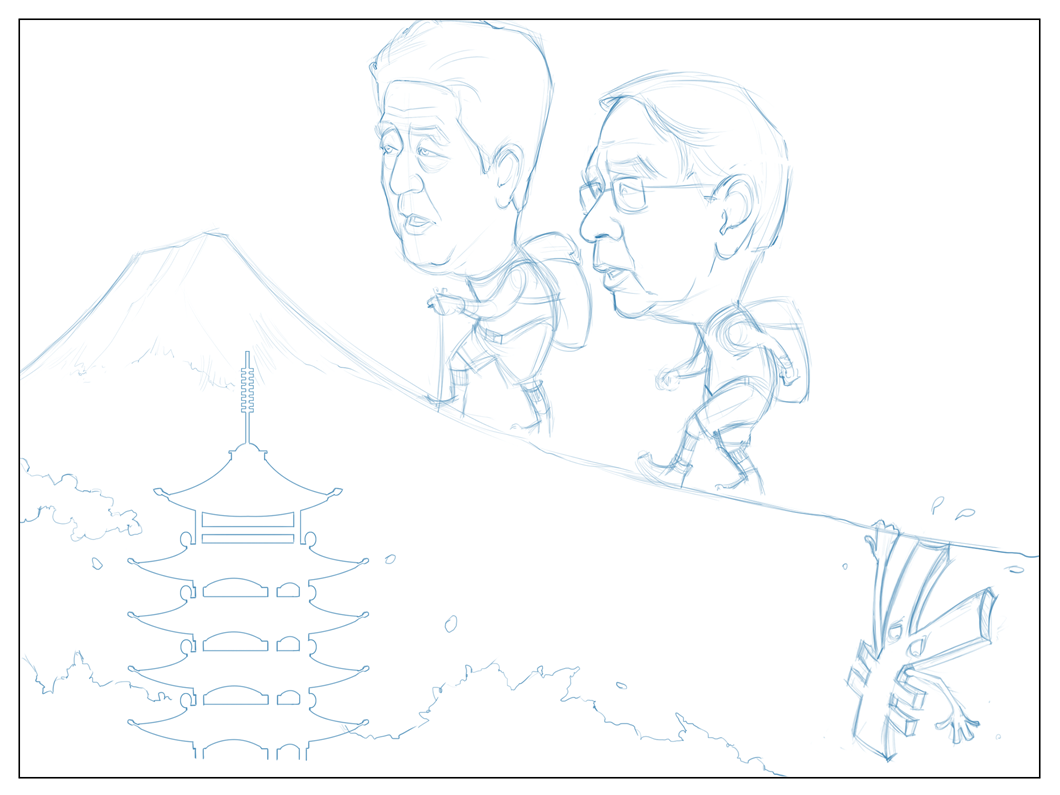 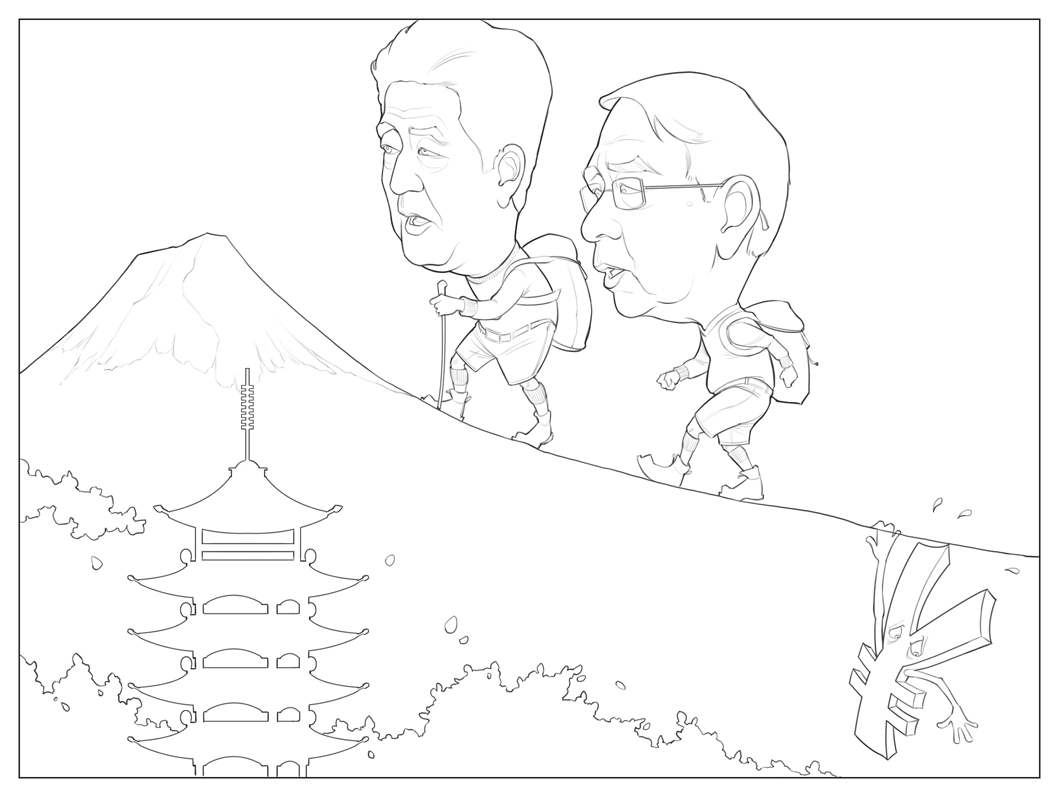 And here's the comic in brilliant technicolor: 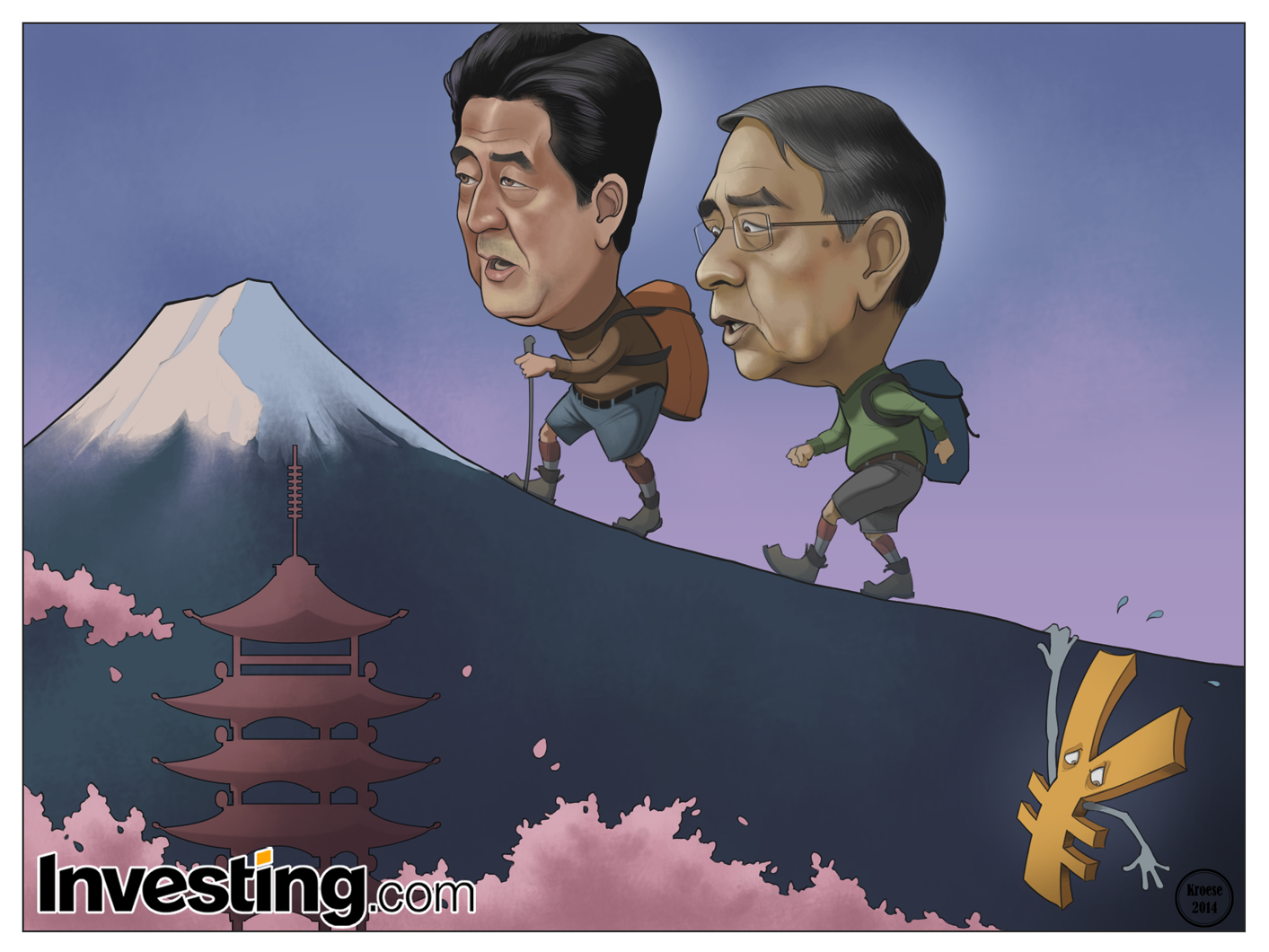 I like the way this comic turned out, but admittedly, it's a little weird.  Maybe surreal is a good way to describe it.  One of the strengths of comics (and illustration in general) is that they can depict anything.  They're not limited in the slightest by reality.  However, sometimes the reality that gets created in a comic is strange enough that it almost seems psychedelic.

For instance: I was asked specifically to draw Abe and Kuroda hiking up Mt. Fuji.  Mt. Fuji is a fairly recognizable mountain, but only seen from certain angles and from a certain distance.  I'd be willing to bet it doesn't look much like Fuji when you're ON Fuji.  Abe and Kuroda's faces had to be large enough to be recognizable.  So there are two proportions (Fuji and the characters) that are sort of set.

The solution I came up with is the one you see here.  It has all the elements that were requested, but this solution meant Abe and Kuroda had to be gargantuan in comparison to Fuji.  Add to that the odd Yen character and the purple sky and the result is a comic that looks like an LSD-fueled 1960s Chinese propaganda painting.

And maybe it's only weird because I've been staring at it for too long and thinking a little too hard about something that's not supposed to be thought about at all, like the mind of god or an episode of McGuyver.  Only insanity lies therein.