This week's comic for Investing.com has to do with currency strength.  More specifically, it's about the strength of the US Dollar as compared to other currencies and the implications contained therein.

Early Wednesday morning, I was asked by the good folks at Investing.com to draw the following:

-A boxing ring
-In the ring, a well-muscled boxer flexing.  The boxer needed to have the dollar symbol tattooed on his chest and a championship belt around his waist.  The belt was to have the forex symbols for four different currencies crossed out.
-In the front row of the audience, Janet Yellen, Haruhiko Kuroda, and Mario Draghi were to be seated; Yellen looking concerned and Kuroda and Draghi looking happy.

Three hours later, I had a rough layout: 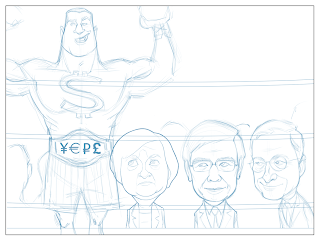 Maybe an hour and a half after that, I had the outline: 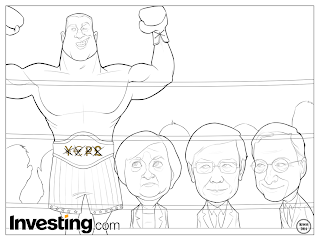 Two hours after the outline, I had the flat color knocked out.  At that point, the rest of the day was shading (another three and half hours, give or take).  Here's how the final turned out: 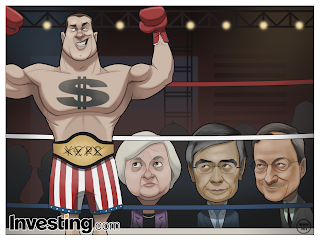 Like last week, this week's comic was a lot of work.  Still fun, but hard.  There isn't any room for dawdling on Investing.com day.  With the exception of a few small breaks, I'm drawing for the entire day (usually about 9-11 hours).

I think this one turned out pretty well.  I think all the characters look pretty good.  Of course, I might have made some different choices given more time, but there isn't much point in dwelling on that.

A word or two on the background:  Originally, I was going to just leave the background relatively blank.  It would have had a dark red gradient and that's about it.  But it looked too sterile and flat, so I started experimenting with lighter spots and darker shapes and came up with what you see here.  I think it does a decent job of creating a little more depth and interest.

Usually, when it comes to backgrounds, I get too hung up on the idea that anything in the background has to make logical sense.  There has to be a concrete reason for something to be included.  But with backgrounds, I'm not so sure that's true anymore.  I think sometimes it's fine to suggest depth and structure without necessarily having to explain it.

Overall, I'd say this comic was a win by decision but not by knockout.

Energy wise, I'm officially down for the count.  Throwing in the towel for now.