This week, the subject was Bitcoin.  I know almost nothing about Bitcoin except for some of the basics, so be patient.  Apparently, there are two main Bitcoin exchanges: Mt. Gox (Japanese) and BitStamp (which was originally a Slovenian company but now operates out of the U.K.).  Recently, Mt. Gox suspended its operations temporarily, either because of or in response to a sharp drop in the value of bitcoins.  According to Bitstamp, however, the Bitcoin value remained steady, which now means there's a huge disparity in the value of the digital currency based on which exchange you're dealing with.

This fluctuation in value is one of the main criticisms of Bitcoin and one of the primary reasons cited when critics say it will never replace mainstream currencies.  At any rate, this is the situation I was asked to portray in this week's financial comic.  More specifically, I was asked to draw a trader attempting to withdraw (unsuccessfully) from Mt. Gox while another trader successfully makes a withdraw from Bitstamp (the concept and idea were thought up by the team at Investing.com, as always).  Here's the sketch: 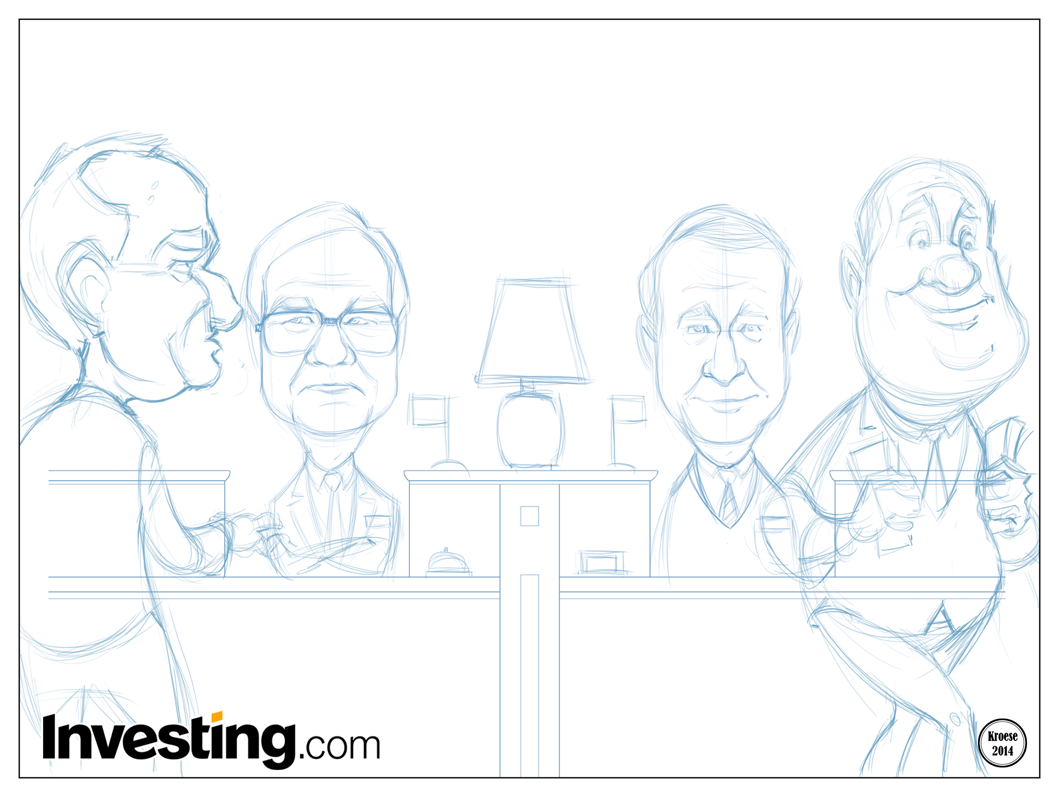 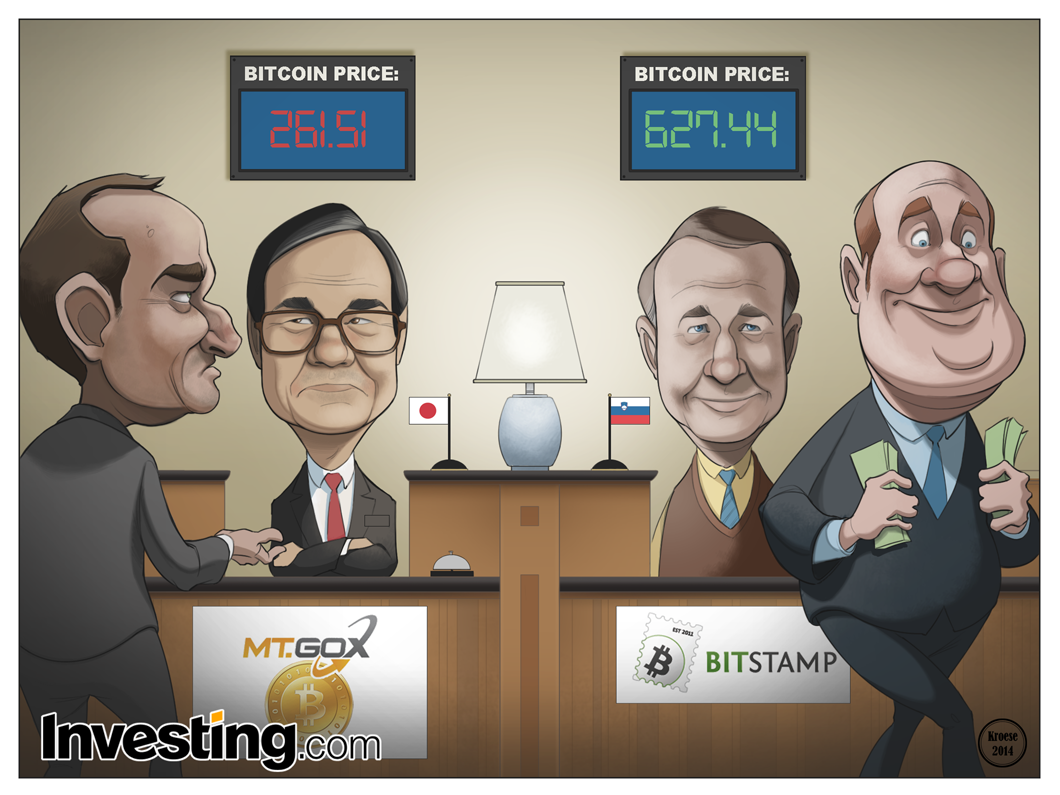 I'm going to be candid for just a minute here.  This blog is supposed to be a conversation about illustration.  But it's also supposed to be an advertisement to potential clients about my abilities as a professional illustrator.  Those two goals are sometimes (often) at cross-purposes.  I want this to be an honest reflection of my experiences as an illustrator.  But advertisements are rarely honest and candid because they're trying to sell things, which typically means painting a more optimistic picture than is necessarily warranted.

What that means is that I sometimes feel conflicted about giving honest critiques of my own work out of fear that I might turn away potential clients.  If this blog was purely a vehicle for drawing in more business (heh heh..."drawing"..heh), I would just leave out the negative aspects.  But just posting recent jobs and ginning up some pink smoke about how great I did on them wouldn't be very interesting.

So, without further ado:

I'm not super happy with the way I drew this comic.  I think it's a bit boring (colors, angles, expressions, etc.).  I don't particularly care for the faces.  And I think the composition is tepid at best.  Here are my excuses: I have one day to do these comics.  And this one had four characters.  The more characters, the less time I have to work on the details.  The less time I have for everything, to be fair.  It's hard to slow down and think about composition and color and everything else when I'm panicked about the deadline breathing down my neck.

Still, I'm going to try harder this coming week.  It bugs me to no end when I produce mediocre work.

Several weeks ago, I was asked by my mechanic (who also happens to be a friend) to think up a few newspaper ad concepts.  The business is called "Deny's Auto Service".  Having never done any design or illustration work for a mechanic or other car-related business (save for a job for Toyota years ago), I was pretty excited to work on these.  I figured there would be a wealth of material to draw from and I wasn't disappointed.

Here are the ideas I came up with: 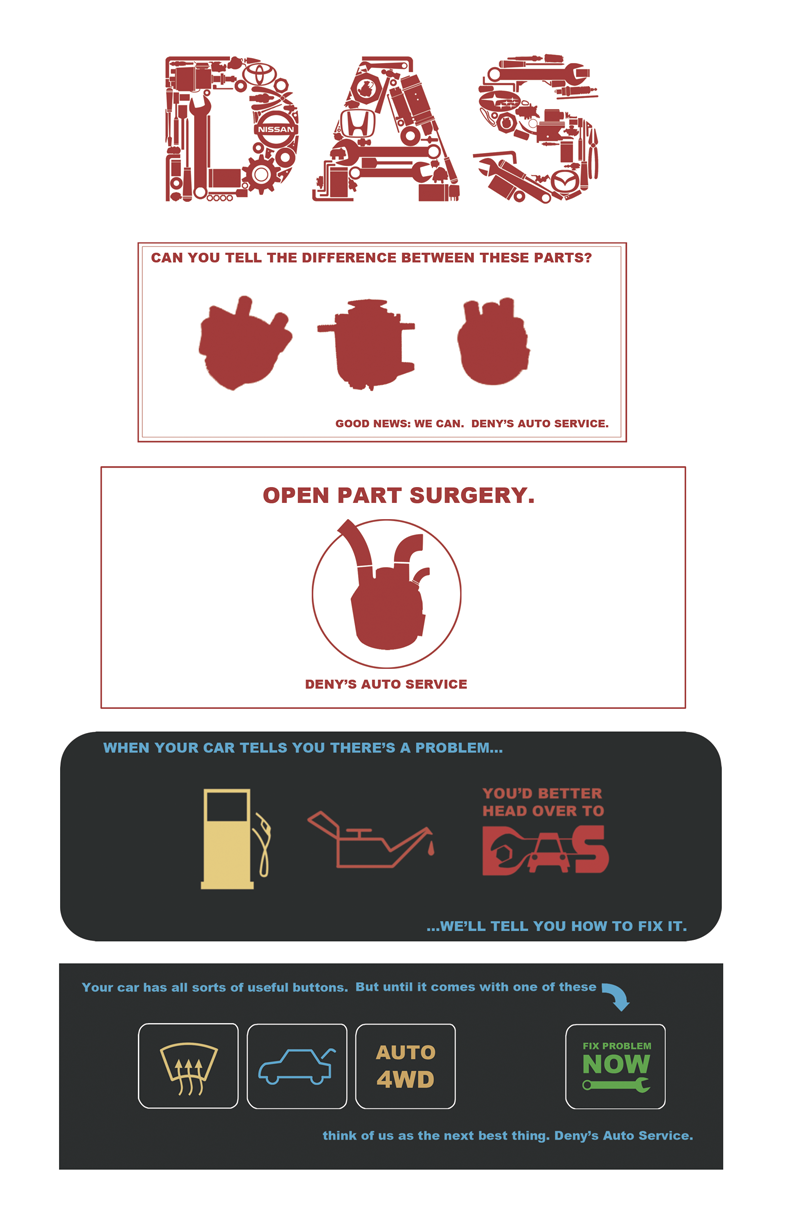 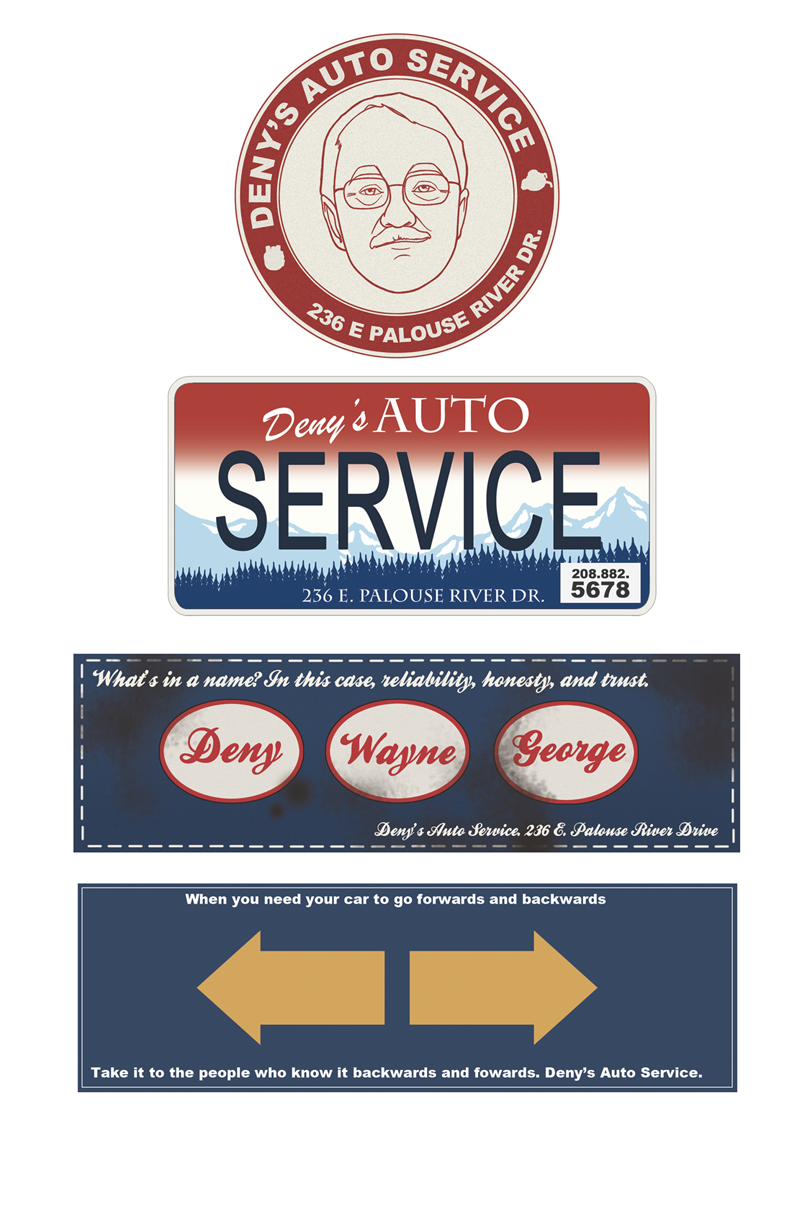 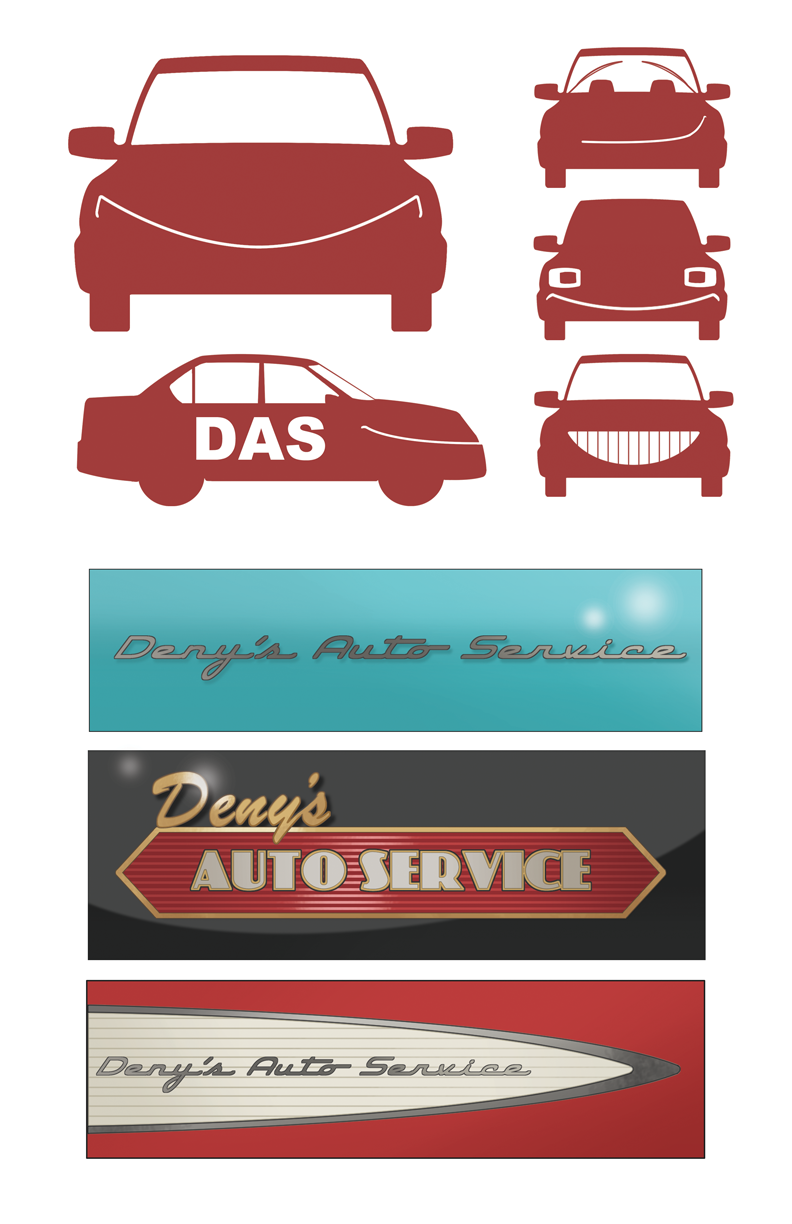 My favorites are the last three, which were meant to look like the side elements on classic cars.

Cheers.
Posted by Noah Kroese at 9:12 AM No comments:

During the testimony, Yellen indicated that there would be no significant departure from current Fed policies.  The Fed plans to stay the course set by Ben Bernanke (keeping interest rates low until the unemployment rate goes "well below" 6.5% or until inflation begins to rise).

This is not the kind of news that excites anyone but policy wonks and finance buffs.  Even those two descriptive sentences above made me wax over a bit, and I was writing them.  What I find more interesting was what I perceived to be a bit of sexism in the reporting of this story.  Yellen was said to make "no market damaging mistakes" during her testimony.  Apparently, it was news that Yellen DIDN'T make a mistake.  Now to be fair, maybe this was just the reaction to a fairly new Chairperson on their first time testifying in front of congress.

But Yellen is hardly a rookie.  She's been in this game for quite a while (you don't get picked to be head of the Fed without some serious Bona Fides).  And I read that neither Bernanke nor Greenspan ever had to testify for six hours.  Again, perhaps these are coincidences that have nothing whatsoever to do with Yellen's gender.  But history would suggest otherwise.

Anyhoo, tirade aside, I was asked to draw Yellen testifying in front of congress with Ben Bernanke floating above her as her guardian angel.  Bulls and bears were to be sitting in the audience, looking calm.  Here's the sketch: 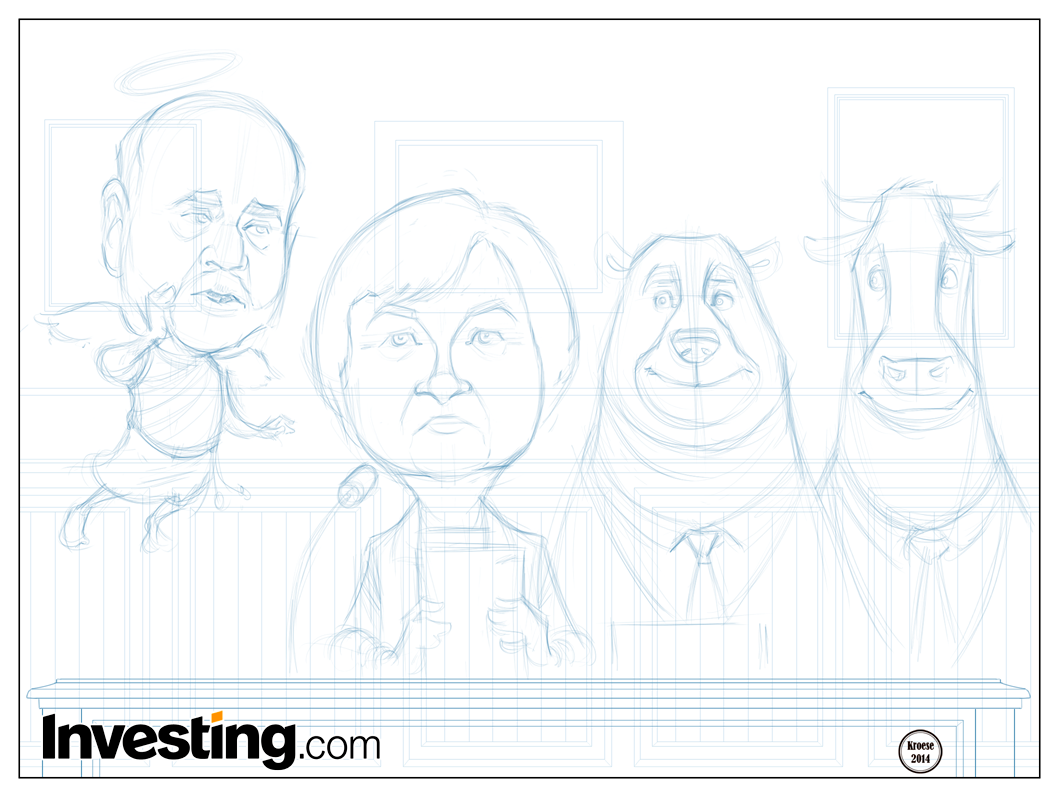 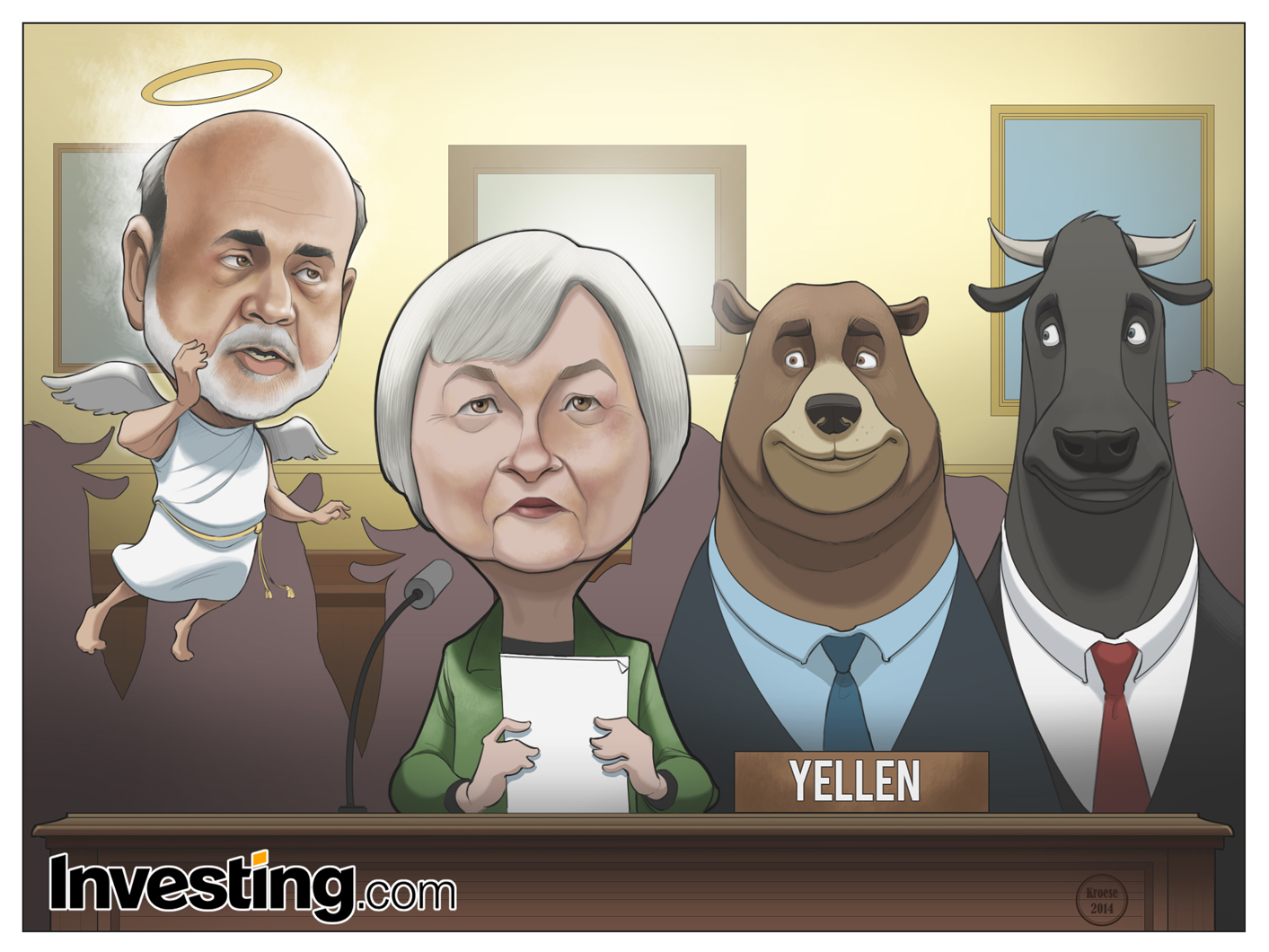 I think this is one of the better comics I've done for Investing.com to date.  I like the way Yellen and Bernanke's faces turned out.  I'm even satisfied with the bull and the bear (I usually don't like the way they turn out for a variety of reasons).

So, overall, not a bad day's work for Investing.com.

Posted by Noah Kroese at 9:01 AM No comments:

Wintertime. And the livin' ain't easy.

This week, I was asked by the team at Investing.com to draw a downhill skier wearing a Team U.S.A. uniform.  The skier was to be headed down a steep slope, clearly struggling.   He's meant to represent the US economy, which has apparently slowed somewhat in recent weeks.  Some posit that said slowdown is due to the wintry conditions currently punching people in the face with snow and cold across the country.

I myself can relate to this.  When I woke up this morning, it was one degree outside.

Here's a selfie I took this morning after a brisk walk: 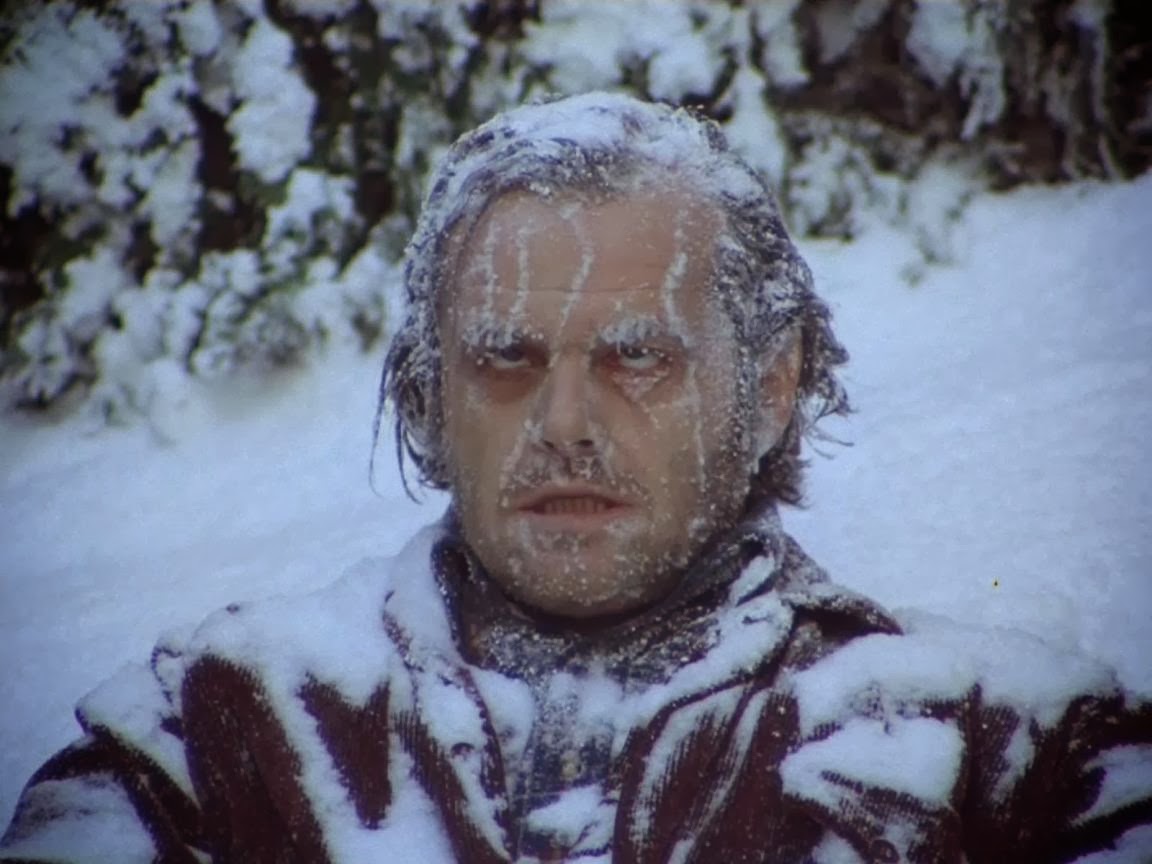 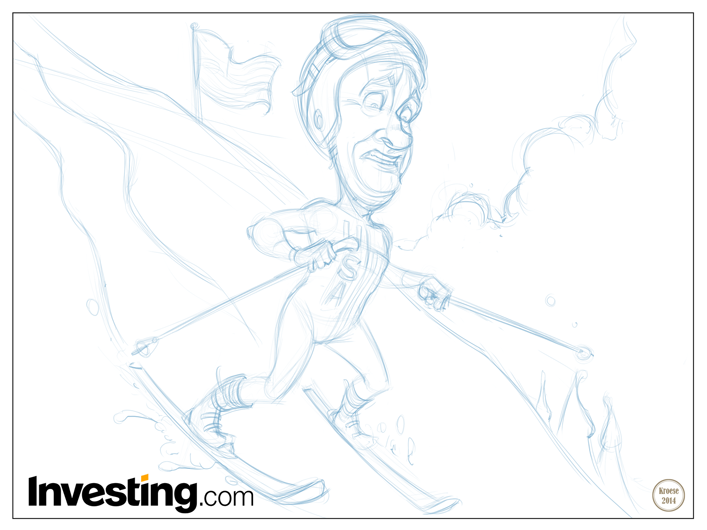 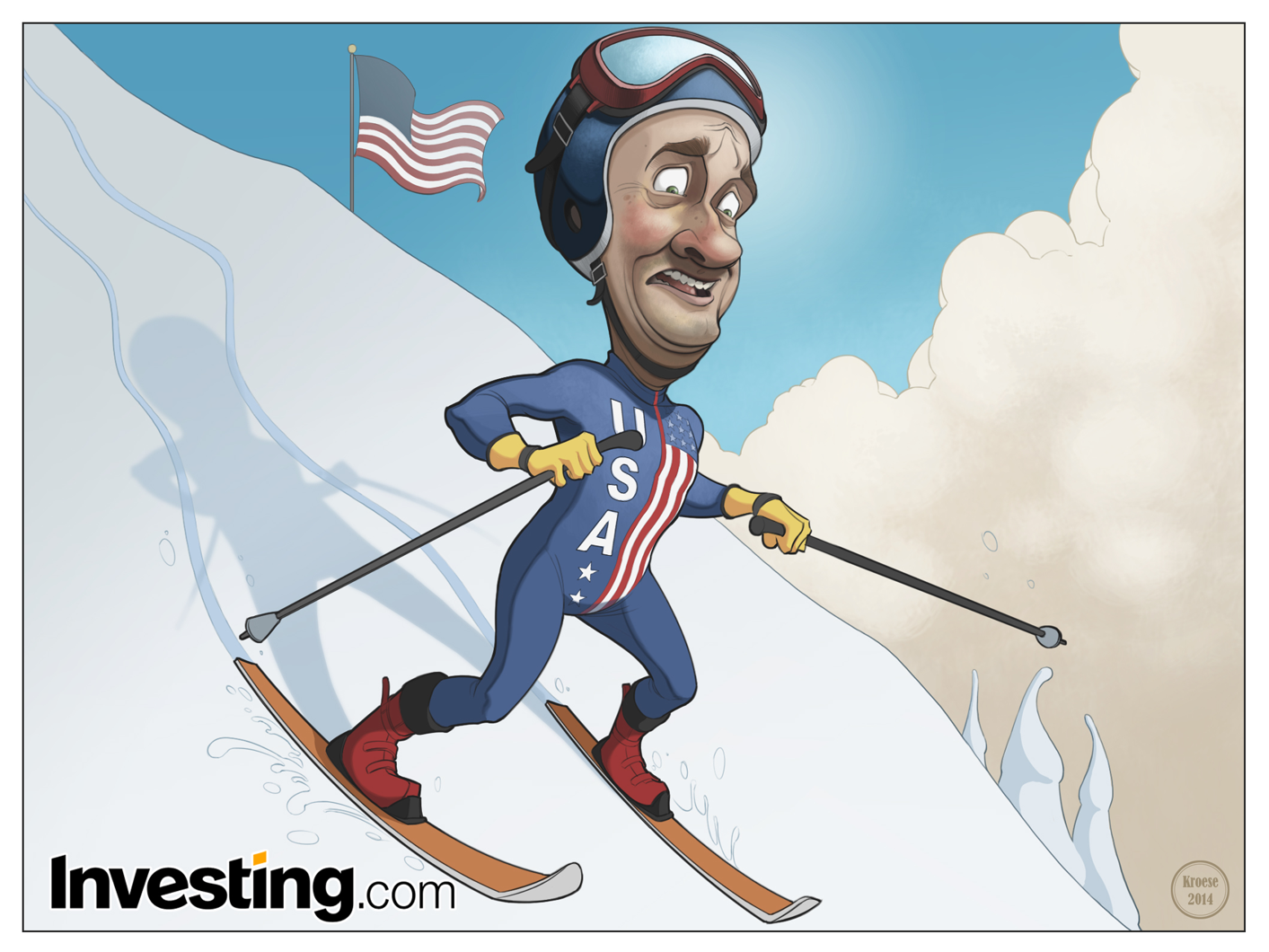 I'm going to tip my hand here and tell you that I was once a nerd.

Shocking for an illustrator to admit, I know.  But once upon a time, I was a pudgy 6th grader whose only friends could be found in the pages of fantasy novels and on the show "Star Trek: The Next Generation".  Those days are but a distant memory, of course.  Now I couldn't even find the time to watch some nerdy TV show, what with all the F1 racing and supermodel dating I do.

But once in a while, a super cool guy like myself feels nostalgic about the bygone days of youth and decides to take a commission involving space and science fiction elements and what have you.  This particular throwback was commissioned by Dr. Simon Kattenhorn, a geologist, planetary scientist, expert on Europa, and friend.

I was asked to draw Dr. Kattenhorn and two of his fellow planetary scientists walking in space above Europa, which is one of Jupiter's moons.  I was also asked to include features on Europa's surface called cycloids.  You can read more about them here. 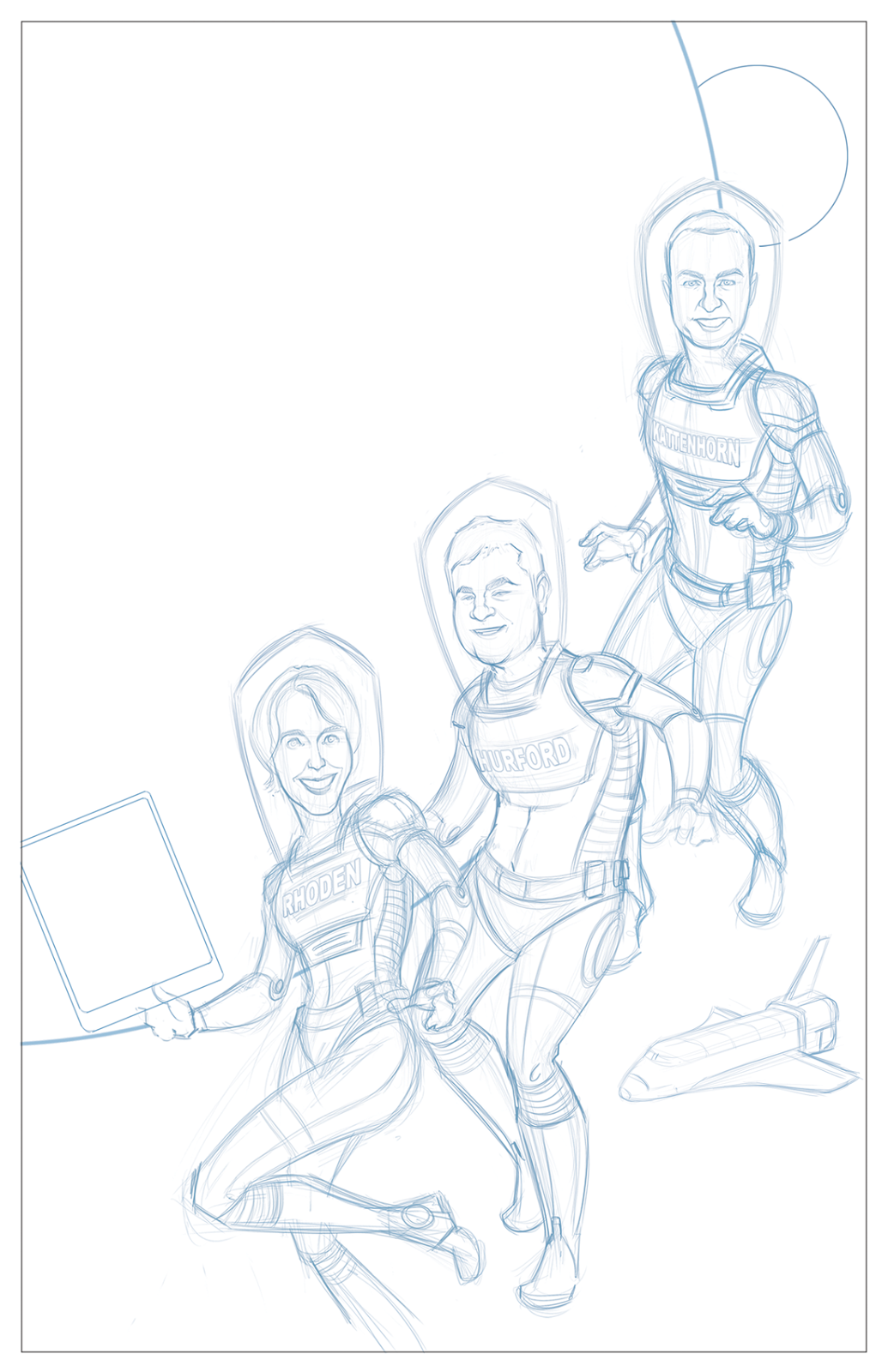 Ok, truth be told, this assignment was totally, completely, un-quantifiably rad.  It scratched just about every nerd itch I have (these are metaphorical itches, of course.  Literal nerd itches can usually only be scratched by a pharmacist). 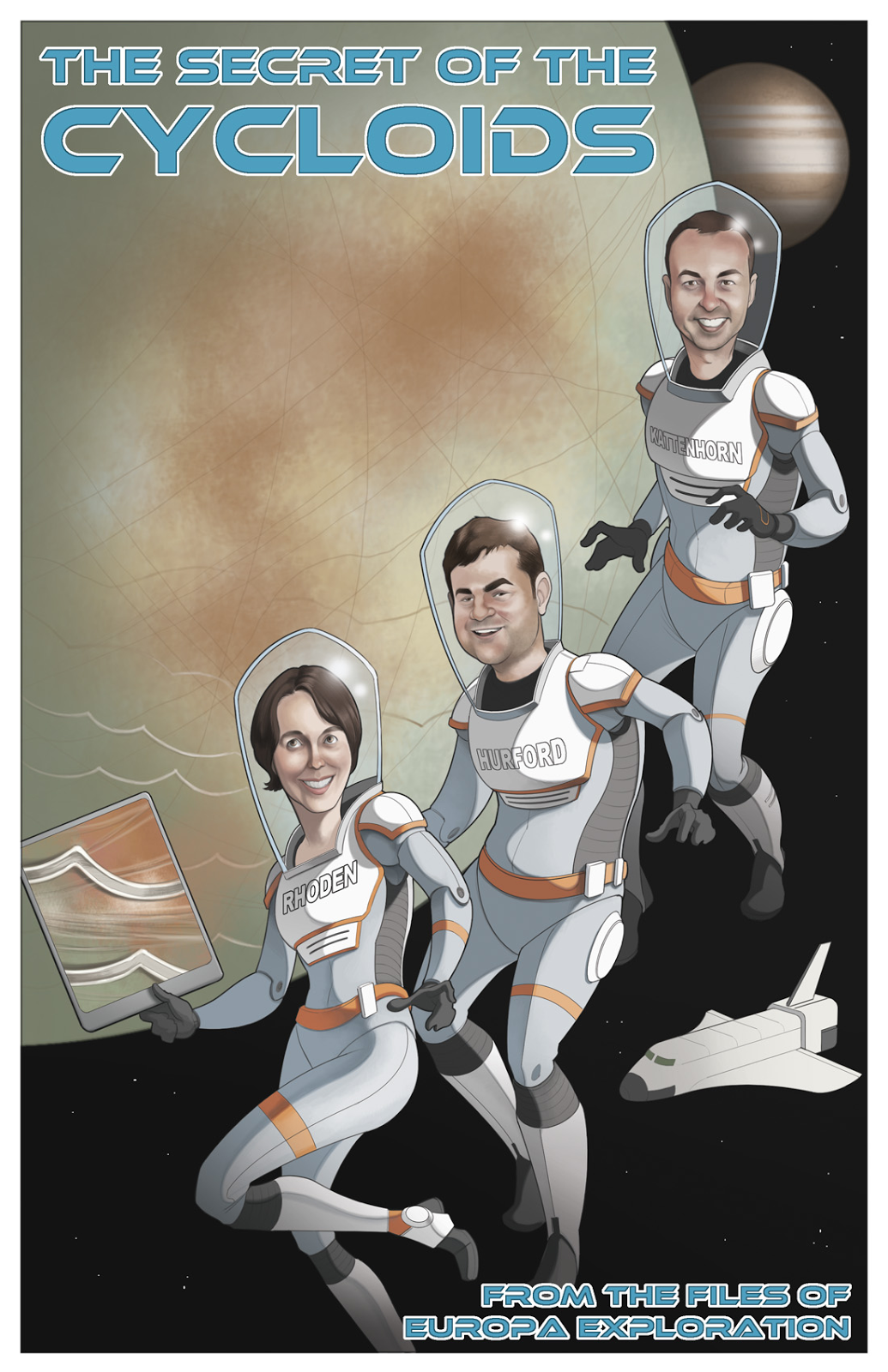 This one couldn't have been any more fun if I'd been drawing it while racing an F1 car on a date with a supermodel.

Posted by Noah Kroese at 3:44 PM No comments:

From the other side of my drawing life:

Cheers.
Posted by Noah Kroese at 7:10 AM No comments:

Ok, maybe "Drawpocalypse" was a bit of a sensational title for this set of illustrations for Decagon Devices, but I was excited to work on them.  And things ended well as far as this project was concerned, unlike apocalypses, which tend to end poorly.

These illustrations/designs were for the Aqualab side of Decagon.  They'll be part of an insert included with Aqualab products.  The front side has some preliminary instructions that needed some visual accompaniment: 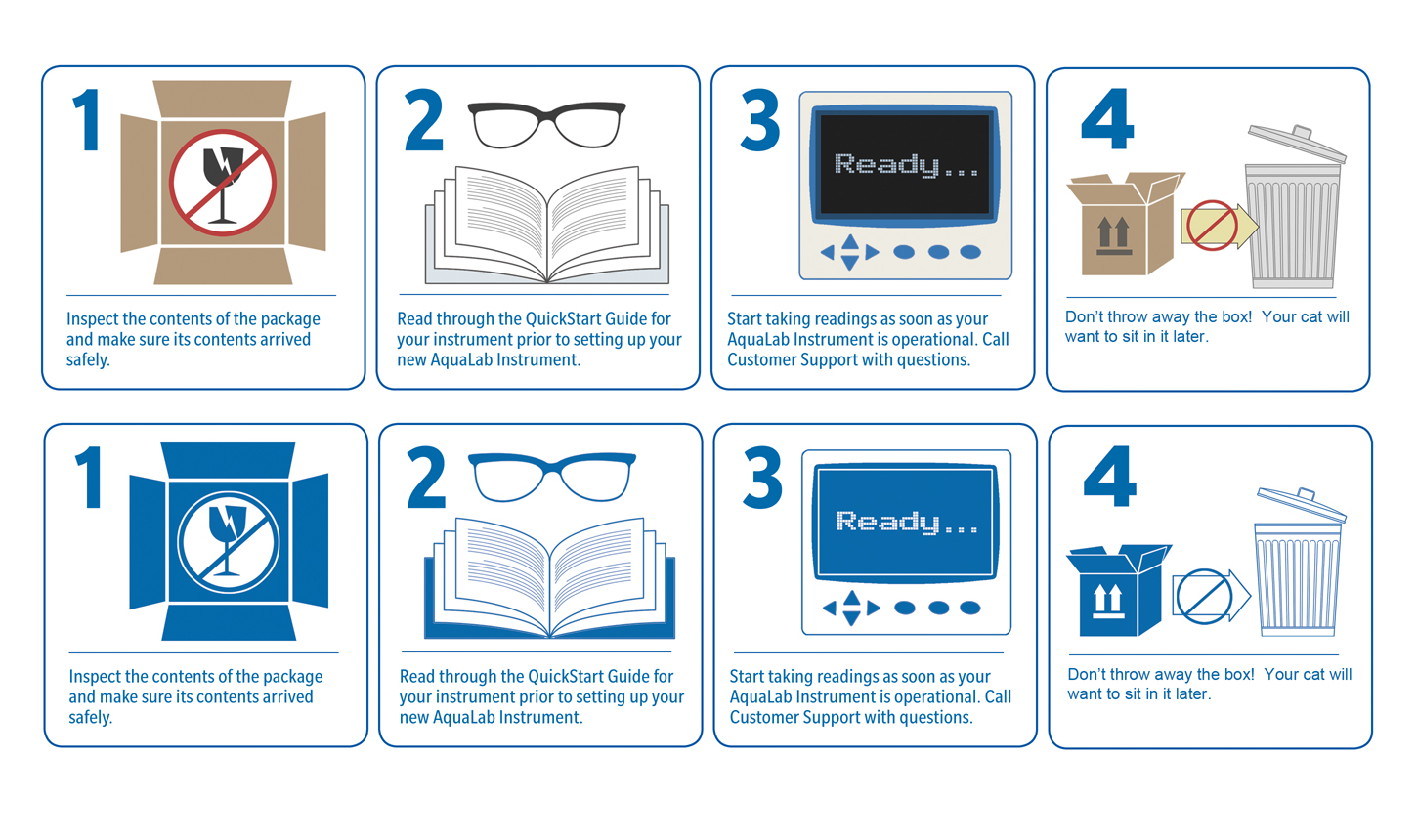 The back side (heh heh..."backside"...heh) is a poster for the purposes of fun-having: 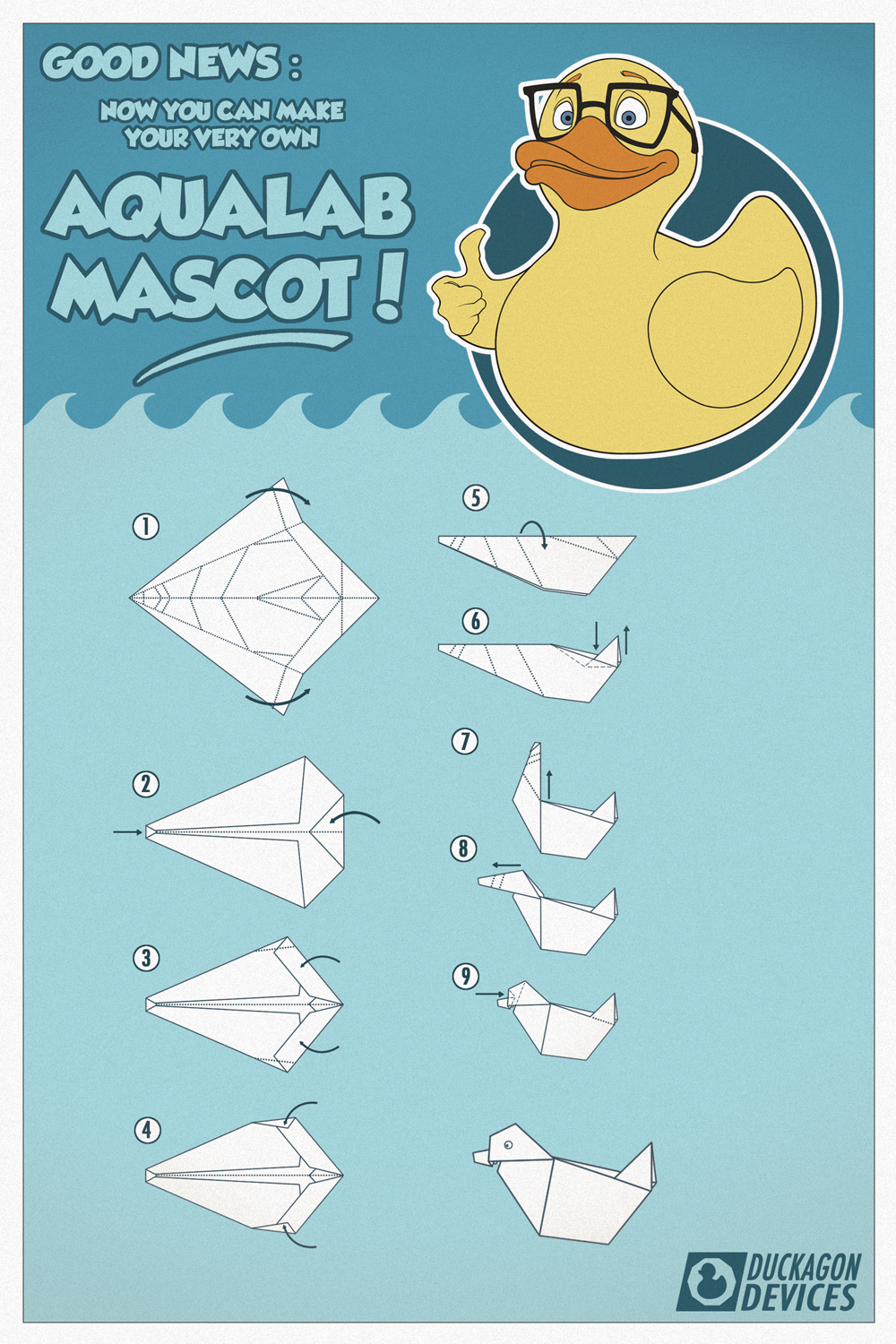 In lieu of a comic for Investing.com this week (there was a scheduling conflict but we'll be back on the air next week), here's some recent work for Decagon Devices.

These first two have to do with the difference between beam and diffuse radiation:

Nextly, we have some graphs: 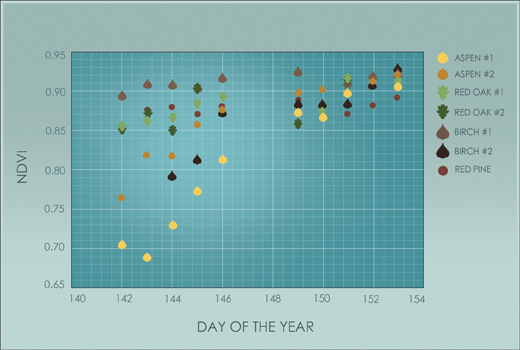 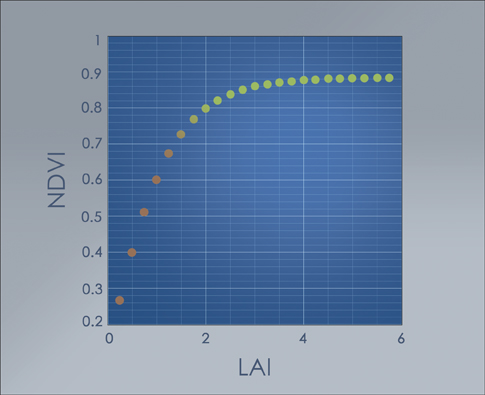 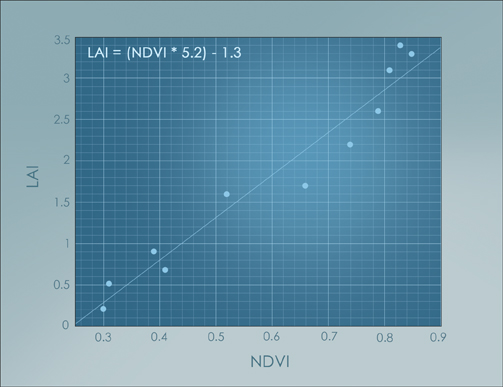 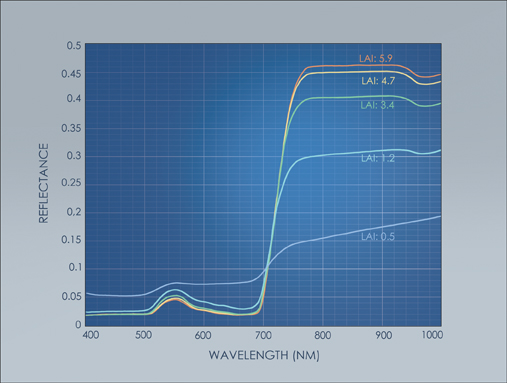 I don't have too much to say about these.  Graphs don't seem like they would be terribly exciting to draw, but I'm always happy to do them.  I like the challenge of turning graphs (which have never been the flashiest of data delivery vehicles) into something visually appealing.  Also, they're a nice change of pace from time to time and I think they force me to consider a different set of aesthetics.