Here's last week's comic for Investing.com.  For those of you not living in North America, last week was Thanksgiving, which is a holiday that celebrates the eve before Black Friday.  It's typically celebrated by eating an intense amount of food and then watching football in lieu of awkward conversation with family.

I was asked to draw Ben Bernanke carving a turkey while the bear, bull, hawk and dove sat at the table.  Here's the sketch: 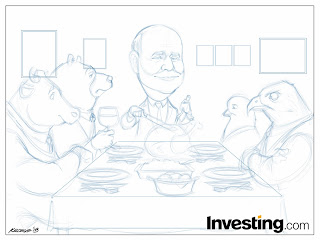 Five characters is a lot of work for a single day deadline, so there are all sorts of details I missed accidentally or didn't finish because of time constraints.  But I did add a few details to keep things interesting for myself:

-The dour, non-plussed expression on the bear's face
-The bull, pleasantly checking his watch
-The hawk glaring across the table like that uncle who only wants to fight about politics
-The dove, taken aback at a roasted bird being caved up right in front of her

I know I'm a bit of a broken record about the turnaround time on these comics, but it really is the most influential factor in how these comics turn out (other than the subject).  There just isn't enough time to sit and think carefully about how the comics should look or what details to include.  There's only enough time to act on instinct and then draw for my life.  It's kind of fun. 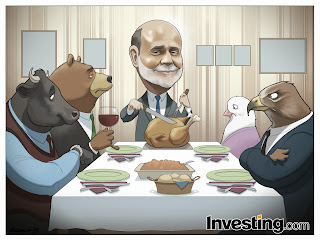