Here's last week's comic for Investing.com.  It was (as is almost always the case) authored by the team at Investing.com and drawn by some guy named Noah Kroese.  The comic is about the retirement of Ben Bernanke, chairmen of the Federal Reserve.

Though I'm not sure if this is the last time I'll be drawing Ben Bernanke (I suspect not, as even former Chairmen of the Fed often make the news), but the idea that this could be the last time is a bit strange.  Including this comic, I've drawn Ben Bernanke at least 21 times.  When you draw someone that many times, it can start to feel like you know them.  Acknowledging Bernanke's retirement almost feels like saying goodbye to a friend.  A friend who never, ever talks about anything but interest rates. 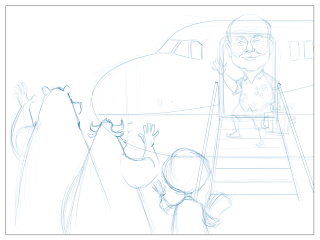 I'm not sure if I'll be sorry to draw him less or not.  Drawing Bernanke became almost a ritual after a while.  Or more fitting, it became like a word that you repeat over and over until you can't understand the meaning of that word anymore.  It becomes just a noise.

At any rate, I'm mostly dissatisfied with this comic.  I think Bernanke's face came out fine (I purposefully made him look exhausted), but the rest is a bit of a wash at best.  The plane looks like garbage.  It's flat and lacks detail and character.  Also, the whole thing should have been done as a profile view so that we could see the faces of Bernanke, Yellen, and the bear and bull.  But that perspective didn't occur to me until I was finished with this version and there wasn't enough time to do another. 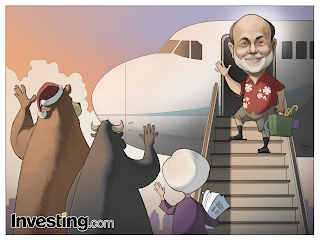 What can I say?  Last week was the most stressful week I've ever had professionally.  I met four different deadlines over the course of five days.  I worked until I literally got sick.  This comic came at the very end of that gauntlet of work, stress, and sleep deprivation.  I limped over the finish line.  So, while I'm not thrilled about my performance on this comic, given the circumstances, it came out better than expected.