Keep your hands and arms inside this comic.

This week's comic for Investing.com involves the tumultuous rise and fall and rise of the value of the Bitcoin.  Over the past several months, the Bitcoin has seen a pretty dramatic fluctuation in value.  The crew at Investing.com asked me to draw a comic that depicted this fluctuation as a roller coaster ride with Ben Bernanke at the controls.  Here's the sketch: 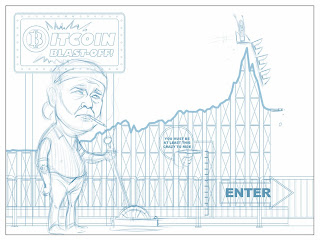 If there were an actual roller coaster based on the Bitcoin at say, a county fair, what would it be called?  Bitcoin Blastoff, of course.  The sign was a fun little element to include, mostly because it seems like every carnival ride sign was designed in the 80s.

I also thought it would be a whole heap of fun to draw Bernanke as a carny.  I've drawn Ben Bernanke a lot at this point, so adding a little variety to his getup was a way for me to be excited about drawing him yet again.  It's said that humor is usually predicated on the unexpected.  And what's more unexpected than seeing the ever-reserved, conservatively-dressed Bernanke as a poorly-clad carny, smoking a cigarette and emblazoned with tattoos?  Nothing, says I: 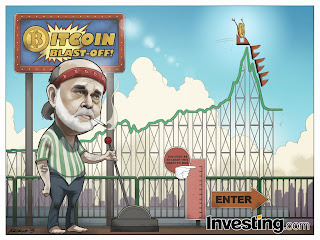 It was, as predicted, fun to draw.  However, as I was drawing it, I had the thought that it might not go over well.  And that ended up being the case.  They liked the cartoon, but didn't think it was a great idea to depict Bernanke in such a fashion.  It didn't bother me.  I knew the risk before drawing it and was willing to accept that risk.  Here's the revised version: 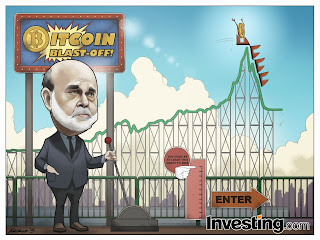 A word on smoking: Back in the day, smoking was cool because marketing.  And also because people didn't know what it was doing to them.  And so, the image of a cigarette was one that came pre-packaged with a lot of other ideas about image and culture and sophistication.  These days, I think a cigarette is still an icon, but one of a much different flavor.  We know how detrimental it is to smoke, which is why I think the image of a cigarette is now one that's shorthand for people who don't really care about anything anymore.  And that's powerful, too.  That's one of the reasons I still like to include it occasionally in my illustrations.  It reinforces certain characterizations.  Cigarettes aren't Dorothy Parker anymore.  They're Charles Bukowski.

Anyway, overall, this comic is so-so.  I like the color, but I'm not crazy about the scaling or the composition.  And this isn't my best likeness of Bernanke.  His eyes are too close together and his nose isn't quite right.

I'd give this one a 2-corndog rating.

At least we now know that Ben is a ringer for Tommy Chong...

I know, right? I also thought he looked a little like George Carlin in this comic.