I decided to start with the pirate/treasure map concept, which looked like this originally:

After consulting a rough blueprint of the store, redrawing everything from stem to stern, getting accurate locations of every bookshelf and its contents from the owner and adding additional details, she looks like this: 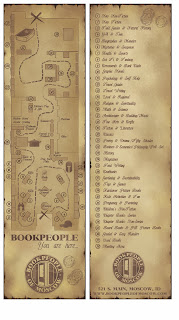 This project was a veritable treasure chest of fun.  It would be hard to pick a favorite part.  Maybe drawing the little doubloons, which each say "Bookpeople of Moscow" in tiny letters.  And also making the map looked aged.  When I was a kid I would sometimes "age" my drawings using tea bags.  The process is a little more sophisticated now, but the result (a giddy, nerd of an illustrator having fun) is the same.

Posted by Noah Kroese at 3:52 PM No comments:

After weeks of work, we're finally closing in on the final version of the logo for Clearwater Pipes and Drums, a local bagpipe band.  First out of the gate, we have three versions with three different bridge options:

Once the bridge variation was chosen, I worked up several border options:

At this point, the band thought the thistle element was a bit too prominent, so I created a whole bushel of options that pulled some of the emphasis away from the thistle (size, color, saturation levels, etc.):

And then there were two: 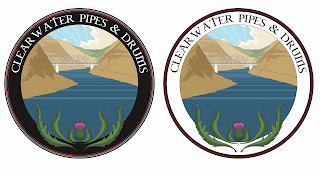 It's been quite a process getting to this point (which isn't unusual for logo work by any stretch of the imagination), but I'm completely satisfied with where we've ended up.  I'll let you know which one they choose.

Posted by Noah Kroese at 3:39 PM No comments: 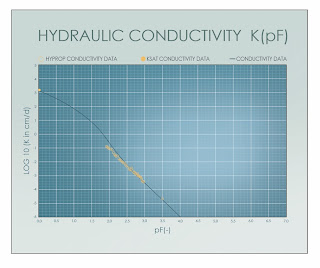 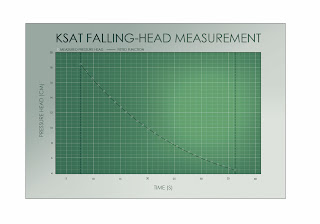 Posted by Noah Kroese at 3:29 PM No comments:

Painful for all parties concerned

Here's last week's comic for Investing.com.  If it seems like I haven't posted one of these in quite a while, it's because I haven't.  There was some scheduling difficulty, which lead to a hiatus.

The comic (as per usual, conceived by the good folks at Investing.com and drawn by yours truly) deals with the debate over the Affordable Care Act (Obamacare), the debt limit, and the Tea Party.  In case you're not familiar with the situation, the Republican Party in this country (and more specifically the ultra-right wing faction of the Republican Party known as the Tea Party) hates the Affordable Care Act.  Even though it's been implemented as a law, the Republican party refused to raise the debt limit (which is basically America making good on money we've borrowed) until the A.C.A. was repealed.  Raising the debt limit is absolutely essential, as it directly influences the credit worthiness of the U.S.  The strategy was ill-conceived and eventually failed, but not before it lead to a partial government shutdown lasting two weeks, costing 24 billion dollars, and further eroding Americans' faith in the government's ability to do even the most basic job of governance.

So, that's the skinny on this comic.  I was asked to draw a donkey (the traditional symbol of the Dems) boxing an elephant (traditional Rep symbol), Obama standing nearby, the bull, bear and a Tea Party member spectating, and a representative of Fitch (a credit rating agency) holding a sign up displaying America's tenuous credit rating.  Everyone but the Tea Party guy was supposed to look dismayed. 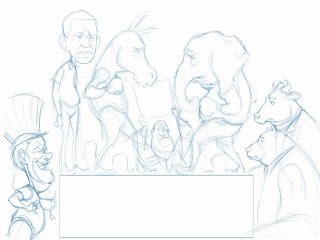 My favorite parts: Drawing the donkey and elephant beat up.  I don't draw facial trauma all that often (you'd be amazed at how seldom clients ask for it), and it's pretty fun.  It lets me put color and detail into faces that I rarely get to include.  I also really like the way the Tea Party character turned out.  He looks like a crazed hillbilly, which was super fun to draw.  Finally, I've never drawn Obama's frowny face before, which was good fun.

Least Favorite Parts: I hate drawing crowds.  It's a pain and it never looks right to me.  I should just develop some crowd templates that I can use over and over, but the problem is that you never know what the composition is going to be.  The crowd can only be seen through gaps in the foreground, so the crowd basically has to be drawn custom every time.  I also wish I would have included the ropes on the boxing ring, but I ran out of time (this one took me a LONG time to draw) and I was afraid the ropes would block too much of the background detail. 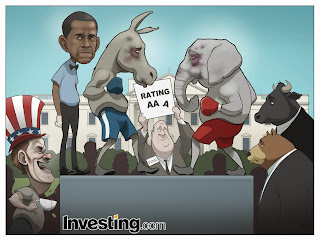 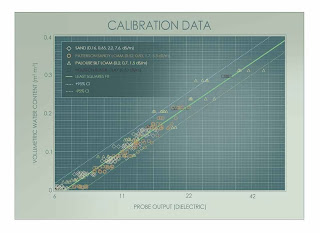 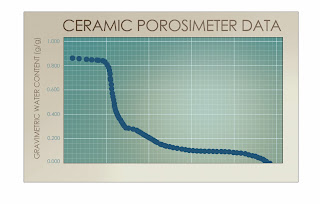 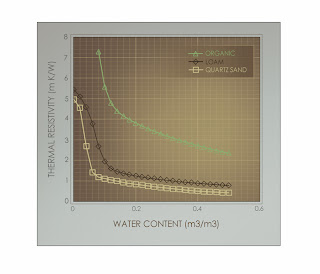 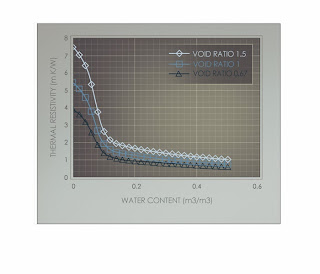 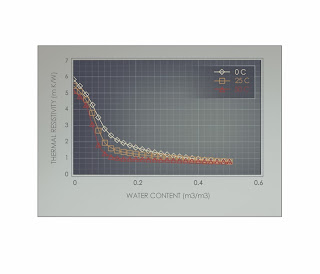 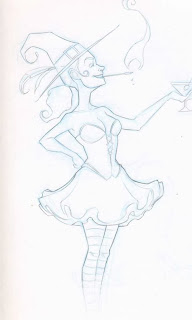 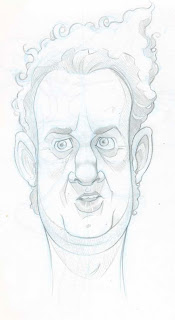 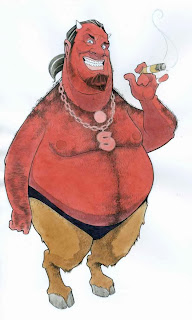 Posted by Noah Kroese at 5:04 PM No comments: