Remember the concept sketches for the "Programs and People" article I posted a couple of weeks ago?  Well, since that post, I've been working furiously on the final version.

Just to recap: The article details the use of genetic engineering to combat bovine infertility.  Specifically, this effort (as far as the University of Idaho's ag program is concerned, anyway) targets dairy cows.  Which is why the secondary art is all dairy-related:

Well, ALMOST all the secondary art is dairy-related.  I included the "Cow-culator".  I wasn't asked to do so and I don't know if it will be included, but I couldn't resist.  I loves me the puns.

So, onto the feature art.  This is what the original concept sketch looked like: 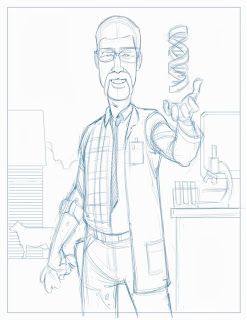 It was a fine concept sketch.  "Fine" in this context not referring to the archaic use by someone like Lawrence Olivier to talk about the quality of the day in an old movie ("Why, what a fine day it is," Larry would exclaim) but instead "fine" as in you went to Shari's restaurant and ordered the spaghetti.  How was it?  "Fine."  That kind of fine.  Adequate.  And that's how I felt about this concept sketch.  It conveyed the idea in a functional way, but there was an ice cream cone's chance in blazes that I was going to use this sketch as the armature for the final illustration. 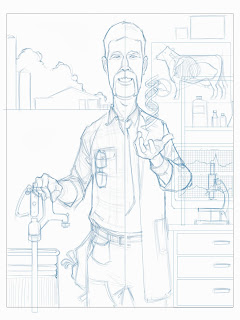 All of the elements of the original sketch are there, more or less.  I added some other details as well.  But mostly I improved the craft.  Joe Dalton's face and body are less cartoony in this version.

I think I've mentioned before my relationship with flat color, haven't I?  Here's my process: Sketch, re-sketch, outline, flat color, inking/shading, additional details.  Flat color is what I call the preliminary application of color.  It doesn't have shading of any kind yet.  Consequently, I think it looks terrible.  It's bland and lifeless.  Like the spaghetti at Shari's restaurant.  In fact, it usually looks so bad that it makes me question whether or not the illustration is even going to work.  This feeling can be akin to panic because, by the time I've reached the flat color stage, I'm pretty much committed to the illustration.  But looking at the flat color almost always makes me wonder whether or not I made the wrong choices and now it's too late to do anything but turn in a crappy illustration.

This time was no exception: 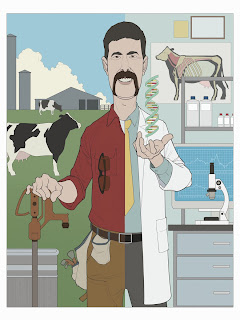 Fortunately, it almost always looks better once I've painstakingly added shading and other details.  This part of the process is usually the part that takes the longest, but it's well worth it.  To invoke a cliche, this part brings the drawing to life.  And because of that, it's my second favorite part of the process (nothing beats sketching for me): 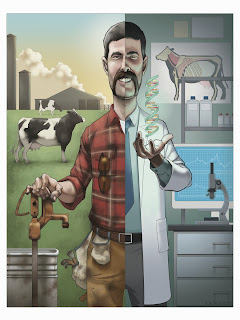 I'm pretty proud of the way this one turned out.  I love the detail and the lighting.  This is one of the big reasons I love working for "Programs and People".  They give me plenty of time, which lets me think about the drawing properly and devote the time I need to make it solid.