I know.  It's been a long time since I did a financial comic, right?  Well, to partially make up for that, I did two this week.  Both have to do with the Investing.com app.

The first comic needed to show a bear and bull sitting outside at a Wall Street coffee shop looking at the Investing.com app on their phones while customers in the background read newspapers.

And this a' here's the sketch: 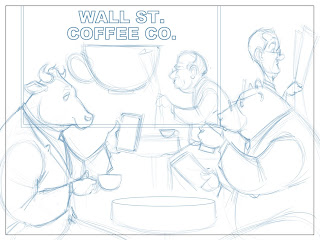 This one gave me some trouble.  That may have had something to do with the fact that I haven't done one of these in a couple of months, but mostly my troubles were composition-related.  We (the viewers) needed to be able to see their phones and the phones needed to be big enough so we could see what they were looking at.  It took me a while to get a composition that worked, and even then I wasn't completely satisfied with it.  But I had to move on to color: 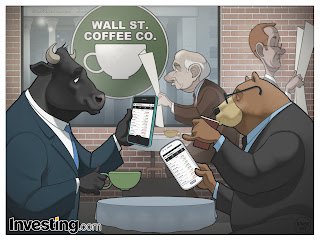 The second comic needed to show Ben Bernanke as a professor writing some financial information about the Quantitative Easing programs on the board while his students check the Investing.com app on their phones. 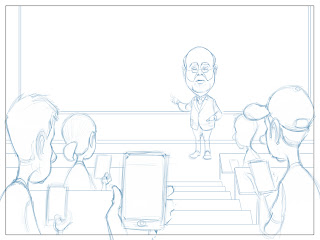 Most of the time, I like the sketch to be great.  If I'm not particularly enthusiastic about the sketch, it's hard for me to be excited about the rest of the illustration.  And I wasn't exactly loving this sketch.  It just seemed boring.


But then I moved on to color: 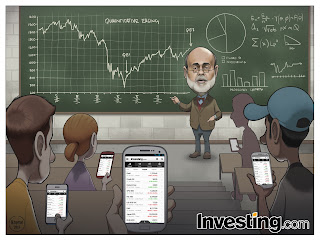 And after adding some cool little details (Bernanke's little professor glasses, leather patches on his elbows, the chalkboard writing and the glow of the phones on the students' faces), this became one of my favorite financial comics.  And that's saying something, considering this comic is the 55th comic I've done for Investing.com/ForexPros.