Agricultural "On the Road"

A couple of weeks back, I was asked to put together a feature illustration for "UI Magazine".  The article, written by the Dean of the College of Agricultural and Life Sciences, is about a road trip he took with a group of University of Idaho Ag students.  The group drove from Idaho's stem to stern, visiting many of the major agricultural businesses along the way.

Among other things, the article discusses the massive role agriculture plays in Idaho's economy.  It also talks specifically about dozens of different businesses and how each compares nationally in terms of production and output.  Coming up with an illustration that features such a wide variety of subjects and information was no small task.  Coupled with a relatively short turnaround time, this project is probably in the top five most difficult projects on which I've worked.

Like all illustration jobs, this one started with a set of concepts.  However, because of the abridged time frame, the concepts were in written form rather than sketched out.  In fact, there aren't many sketches for this project overall and the sketches that do exist aren't that interesting (they're really just rough layouts).

Fortunately, I worked with the same Art Director/Editor/Designer with whom I work on "Programs and People".  Her talent and experience made the whole process easier and more enjoyable.  We discussed the concepts.  One focused on the crops just after harvest, one focused on the growing process and the third concept focused on the various products as they appear at the market.

We decided on a bit of a hybrid of all three, which is fairly unusual but which I think worked well for this project.  The overall theme would be that of a map showing the various products and crops, some in small illustrations and some as larger, more detailed billboards.  It would have a 1950s feel to it (advertisements, old billboards, tourist postcards, etc.).

The first element I worked on was the title:

This isn't a font.  It's custom drawn, with various ag elements used as the background.

Next, I moved on to the state of Idaho itself, which would function as the background.  Originally, the background was slated to be a collage of various types of fields as they would look in an aerial photo: 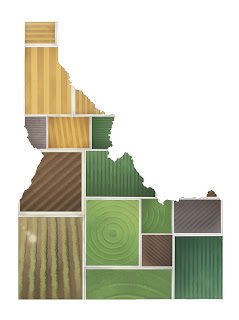 I thought this was a great idea, but it ended up being one of those instances where the concept was sound but once it was drawn it just didn't work out.  When I tried adding other elements on top of this background it always ended up competing with the foreground.  It was too busy and too colorful.  I tried multiple versions of this idea, but ultimately none of them worked.  This was a shame, because I liked the idea and it also cost me a lot of time.  But ultimately, it didn't work and had to be abandoned.

I needed something that would be interesting but that wouldn't be too visually dominant.  The second version was more of a traditional map (like a road map) complete with fold lines, dirt, and places where the map was torn: 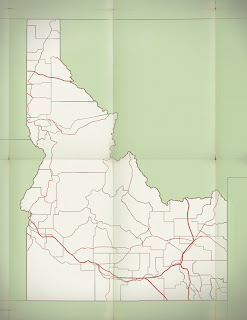 With the background finished, I moved on to the smaller elements that needed to be featured.  These were relatively simple illustrations contained in their own little circles, each representing an Idaho crop/product (not all of these were ultimately used, mostly because of space constraints): 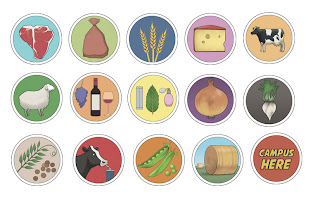 Next, I moved on to the billboards themselves.  This was intensely fun.  I'm a big fan of images (particularly advertisements) from this era, so scouring through reference material was a real joy.  The billboard subjects/products had already been chosen: Barley, trout, dairy, potatoes, wheat and beef:

Finally, it was time to put the whole thing together.  I figured with every detail already drawn, this part would be a snap.  I figured way wrong.  The layout alone took an entire day.

During the layout process, I realized I needed a way not only to show the location of the industries/businesses that the billboards represent (they were too big to simply place directly over their location on the map), but also a way to make the whole composition a little more cohesive.  I came up with the idea of light bulb arrows (the kind you see on old roadside restaurant signs).

The layout process was frustrating and difficult.  But ultimately, I came up with a solution I think looks great: 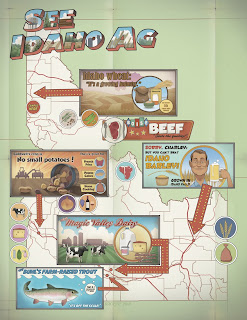 This one was a hard-fought battle to the end.  It was also a genuine pleasure, which seems contradictory.  I was happy to be a part of this project.  And also happy to have a break at the end of it.

Special thanks to Shane Jackson, without whom I could not have done this.