Here's the latest comic for Investing.com.  Short story short: It's about the Beta version of their new app.  I was asked to draw a bear and a bull holding up the phone with the app screen on it.  They were to be shown in a theater.

Originally, I had drawn the bear and bull much smaller.  In that sketch, you could see the whole stage.  The phone was resting on a little display pedestal.  I realized the phone would be too small in that version to be able to see the app screen, so I decided to include a big projection screen in the background where the phone and screen would be projected in a larger format (something like an Apple unveiling).

I looked at the sketch.  And then I looked at the clock.  And I realized there wasn't enough time for that version.  And so a new sketch was drawn up, a kind of Occam's razor  of a concept (the simplest solution is usually the correct one).  This model of efficiency only applies to comics for me, because the detail I love and the speed and efficiency of these comics are often antithetical. 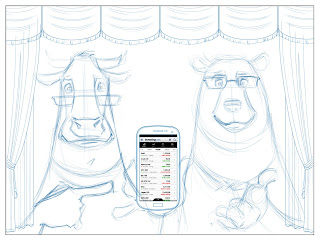 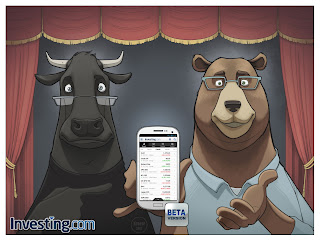 I was pretty happy with the choice to simplify the design and layout.  It made for a better (slightly less stressful) time drawing.  I like the character designs as well (the bull more than the bear).  Overall, I'd give this one a B+.

Quick side note:  I counted today.  To date, I've drawn 48 comics for Forexpros/Investing.com.  That's quite a few.  Particularly given the fact that, at one point in my life, I swore I would never draw comics again.  Perhaps I'll do something special for the 50th.

If I have time, that is.