For several weeks now, I've been working like a madman on a project for the College of Agriculture and Life Sciences (CALS) at the University of Idaho.  Ag Days is an annual event put on by the college and I was asked to create a poster that would advertise this event.  It needed to involve a plethora of different elements focused around the various activities going on during Ag days, landmarks and buildings on the UI campus, and a potpourri of other characters, people and objects.

Ordinarily I would have proposed a number of different concepts and moved ahead with one chosen by the client.  However, in this situation, I knew the complexity of the piece and the amount of time I had to create the poster would make for a lot of work and a close shave as far as the deadline was concerned.

So I worked up this sketch (which was a ton of work in itself), presented it to the clients, and held my breath that they would like it: 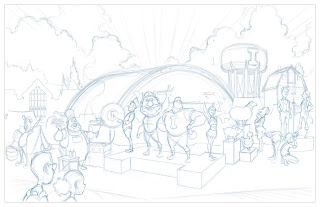 I liked the sketch and believed in the strength of the concept, but I was putting all my concept eggs into one basket here.  If they rejected it, all that work would have been for naught.  See, even if I have a concept I think is strong and well-drawn, it doesn't always matter.  It's my job to provide what the clients want.  So, no matter how well-drawn or clever I think a concept is, if the client doesn't like it or doesn't think it's a good fit for the project, the concept won't work.  Fortunately, they liked it.  They did have some revisions, however.  Round 2 looked like this: 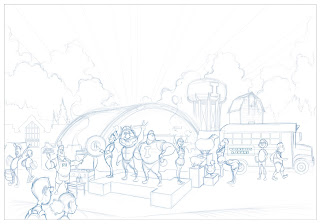 After that, it was a simple matter of outlining the sketch, adding color, adding shading, adding additional details, making sure the piece was visually cohesive, interesting, and well-drawn.  A simple, 20-hour process.

I almost always go through a similar process with every project.  It tends to have three stages.  They usually go like this:

Stage One: Concept Excitement.  This is the part where I'm most excited about the project.  I love thinking about and imagining the various approaches, solutions, ideas and possibilities.  And, of course, I love sketching them out.  There's a life and an energy to a sketch.  Even when an artist died hundreds of years ago, that energy is still in the gestures and lines of their sketches.

Stage Two: Flat Color Fear.  All the energy of the sketch?  That's pretty much eliminated with the first stage of color.  Flat color almost always looks awful.  This is the part where I question whether or not I made a huge mistake with the concept and the whole project is going to be a colossal failure.

Stage Three: Acceptance.  After the last of the shading and detail have been added, the last line has been drawn, and the illustration has been handed in and accepted by the client, acceptance comes.  And usually acceptance comes with a healthy mix of satisfaction that the job is complete and dissatisfaction at parts of the project I wish I had done differently or had more time for.  Sometimes, though, I can look at the illustration when all is said and done, think about the amount of work and stress and thought and care and craftsmanship that went into it, look at the result of those efforts, and be satisfied. 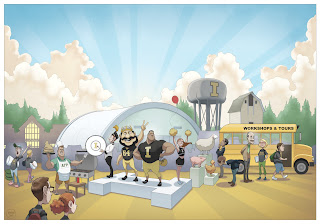