This week's comic for Investing.com deals with a man named Bill Gross (the financial manager and Pimco) and his relationship with the 10 Year U.S. Bond.  Apparently Gross has been betting against the U.S. bond for years and it's starting to pay off.  I was asked by the folks over at Investing.com to draw a comic of Bill Gross in a Western-type scenario with the mountains in the background mimicking U.S. bond graph.

This was a fun assignment.  I don't get the opportunity to draw western stuff all that often.  I've always loved it (probably since I first read Holling C. Hollings' "Tree in the Trail") and was I pretty excited to draw up the comic this week. 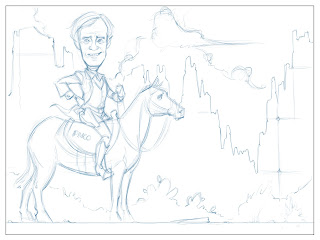 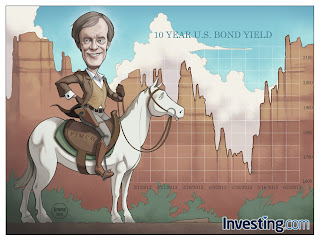 Choosing the Monument Valley-type background was a great opportunity to use a warmer palette than I normally would.  It also contrasts nicely with the sky.

In terms of the caricature, I felt fortunate that Bill Gross is a fairly strange-looking man (mostly because of his hair).  I say "fortunately" because normal, well-proportioned faces are more difficult for me to draw.  Faces with character and distinguishing features are just more fun for me (my girlfriend pointed out that he ended up looking a bit more like Peter Fonda).

Like I said, this one was a pleasure.  I hope next week's is as satisfying.