There's been a bit of a gap in comics for Investing.com lately.  Two weeks, to be precise.

Now, since I hadn't drawn one of these in two weeks, I figured I would be a bit rusty.  I figured right.  Even though I've been drawing all sorts of other things during the comic hiatus, there's still a certain rhythm and mentality to drawing a comic in a day.  Combined with the fact that there were some logistical problems (how do I show a bear and a bull inside a washing machine?) this made for a challenging comic.

In a way, it was nice to have this comic feature Ben Bernanke, who's face is familiar enough at this point that he feels like an old friend.  But it can also be challenging to create a good illustration if I've already drawn someone or something dozens of times.  What can I bring to this particular version that will make it fresh and interesting?

Ultimately, time was of the essence and I didn't have enough of it to ruminate on whether or not this would add anything to the Ben Bernanke illustration canon.  I've said it before, but sometimes being under the deadline gun is nice because I don't have time to navel gaze or be self-conscious.  That comes a day later in a long, rambling blog post. 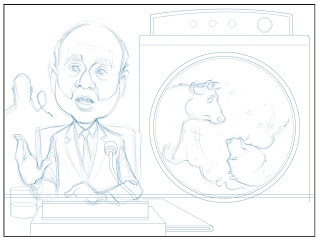 It's not my best of Bernanke.  However, if you're wondering how the bear and the bull fit inside the washing machine, there's a perfectly reasonable explanation: It's Doctor Who's washing machine.  Much bigger on the inside.  He can wash like five loads of laundry at once. 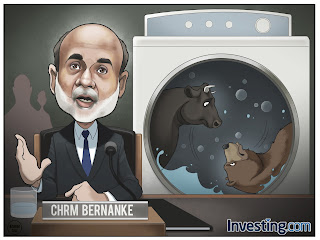 Again, not my best work.  But not bad for a rusty re-introduction to the Investing.com comics.  It probably won't make the portfolio, but that's ok.  I figure it'll all come out in the wash.