Berks! And Maps of the Berkster!

A few weeks ago, the good folks over at Bookpeople of Moscow asked if I would be interested in helping them create a map of the store and I was all like, "Boo yeah!"  Except I didn't say that at all.  I probably said something more like, "Absolutely.  That sounds like a great project."  Not nearly as exciting as "boo yeah", but it's more professional and socially acceptable.

Working with Bookpeople is always great.  I mean, it's a bookstore.  And bookstores are AWESOME.  But this one is particularly awesome.  As are books.  And maps are pretty darned cool in their own right.  So a project that combines those things?  That's the Optimus Prime Awesome.  It's an ornate, hardcover, first edition tome of awesome.

Anyhoo, I put together several concepts and sent them over.  They ended up liking all of them (well, almost all of them.  One of them needs a bit of revising), and now they're slated to become bookmarks.  I think that's pretty cool.

So here are the maps: 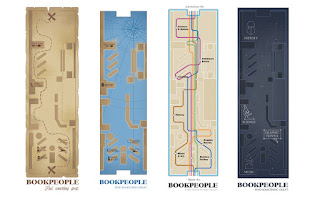 It's usually a pretty good sign when the concept stage of a project is crazy fun.  I'm looking forward working on the final versions, which will have more detail.  Each of these is going to be quite a bit of work, so I imagine they'll come out one at a time over the next several months.