Golden words he will pour in your ear...but his lies can't disguise what you fear.

Here's this week's comic for Investing.com.  It has to do with the plummeting value of both gold and silver.

This week's installment is different for a couple of reasons: First, the concept was actually my idea this week.  The folks at Investing.com wanted a drawing about the falling price of the two precious metals and they wanted it to include two charts that showed said plummet.  They asked if I had any ideas and, from the list of potential ideas I sent, they picked this one.  I had one that included a pirate, but they went with the more practical idea on the list.  I don't blame them, but it would have been great to draw a pirate.  I'm just sayin'.

Reason No. 2 this one is not like the others: This one is really more of an illustration than a cartoon (the difference being that this one doesn't necessarily make a statement or have humor in it).  I don't mind the change, though.  Variety being the spice of life and all. 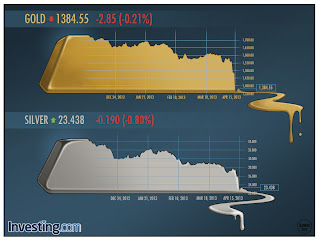