This week's comic for Investing.com deals with the continuing decline of Apple stock.  It suggests that the decline is partially due to the stewardship of Tim Cook and his inability to effectively replace Steve Jobs (idea courtesy of the people at Investing.com).

This was a complicated comic to draw.  I was asked to draw Steve Jobs trying to give a hand to Tim Cook, who was sliding down a chart of Apple's recent stock gains and losses.  I was also asked to depict Tim Cook attempting to pull the stock back up.  Figuring out the proportions, composition and spacing was more difficult than usual.

I think I met every requirement/stipulation/guideline, but given the fast turnaround time, there are a few hiccups.  For instance, I think Tim Cook's body looks a little weird.  Something about the way his head is sitting on his shoulders and the proportion of his torso and legs bugs me.

But I like the way both faces turned out.  I also like how Tim Cook is pulling on the stock line.  I suppose I like it because it's different.  I don't usually think of a stock market line as an object that can be picked up or manipulated, so in a small way it seems like it's screwing with conventions.

Overall, I'd give this comic about a 73%.  I may increase that score as time goes on (I'm writing this on the day I drew it), but for now that seems right.

On a side note, this comic looks a little like the cover of a bad romantic comedy.  I don't mind it.  I've never drawn one intentionally, but this comic makes the idea seem tempting. 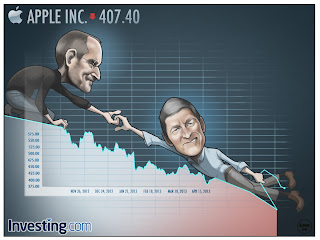