Here are the comics I drew up for Investing.com over the last couple of weeks.  The first, which is about the looming debt ceiling, is a real eyesore.  Seriously.  The subject matter is fine (drafted up, as always, by the people at Investing.com).  But the execution of that subject matter (the illustration)...bites.  I don't say this too often, but I consider this comic to be one of the poorest illustrations I've done in some time.  The caricatures are off, the expressions are terrible, the proportions are lousy.  I have any number of excuses (not enough time, burned out, etc.), but the bottom line is that I just should have tried harder to bring this comic up to snuff.

The second comic is a bit better.  It deals with the fact that Apple stock has taken a bit of a hit lately in the markets.  The comic is a play on the phrase "The apple never falls far from the tree."  In this case, the comic suggests the opposite: That Apple is suffering now that Jobs is no longer at its helm.  I think the illustration on this one is decent.  The likeness of Steve Jobs (in spite of the fact that I couldn't really use normal colors) is pretty good.  Mostly, though, I like how cartoony this drawing turned out.  And, for some reason, I like the shadow beneath the tree.  There's something about that shadow that reminds me of an old cartoon or computer game I used to love.  Regardless, this comic's illustration at least passes the smell test.  Not like that other one.  Now let us never speak of this again. 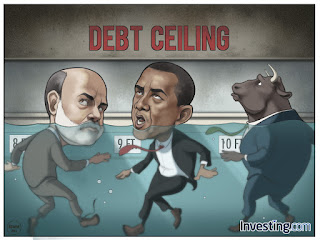 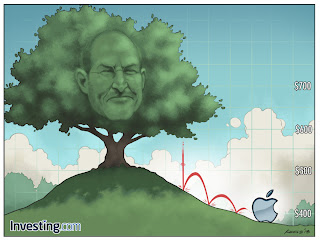