Here's last week's comic for Investing.com.  The subject (as always, thought up by the Investing.com crew) deals with currency values and, more specifically, which currency fell the most last year.

I don't mind this comic so much.  Because of the angle and the relatively large amount of white space, it's a pretty unique comic.  Also, because there was no requirement for the faces of the characters to look like anyone specific, I had fun trying to make each character look like they are from their specific country.  This could be a slippery ski slope to racial profiling, but I used reference photos and tried to keep away from stereotypes (for instance, I used the author Julian Barnes as the reference for the British racer.  He looks VERY British.).

So there you have it. 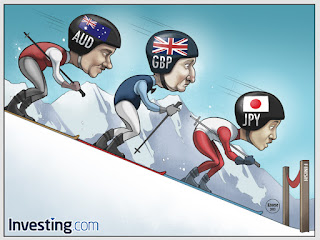