Last week's comic for Investing.com (formerly ForexPros.com) had to do with the holiday season.  Specifically whether or not the bull market would continue after the cookie and eggnog bacchanal had departed.  So far that has turned out not to be the case.  There's little hope of this point of a deal to avoid the fiscal cliff and the markets are taking a bath.  But this comic was conceived before that information was available and I think it nicely combines seasonal fare with the dreaded market archenemy, Baron Von Uncertainty.

I like this one.  First off, the sky is a departure from my usual approach (in color, at least).  Usually, I depict day or night.  But this time I went with more of a twilight and I'm satisfied with the result.  I also enjoy the bear reindeer.  I suppose because he's fat and he's wearing a pair of fake antlers.

I tried to give a little more thought to composition in this one (using the market line and the cloud line to draw the eye toward the sleigh), but ultimately I don't think it mattered much.  For more complex pieces, considering composition is paramount.  But when you're drawing a bull sitting in a bright red sleigh, the viewer is going to look at it.  They don't have much choice.  Also, as much as I don't like to admit it, when it comes to one day deadlines, there just isn't enough time to think about every detail.  I pretty much have to figure out how to solve the illustration problem and then hammer it out as fast as I can.  Again, this is a great exercise and great skill builder.  It also sometimes makes me want to pull my own hair out and go live with some monks somewhere. 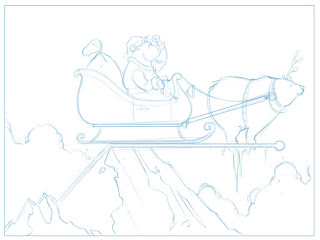 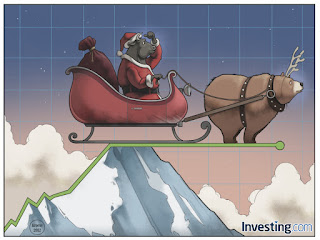