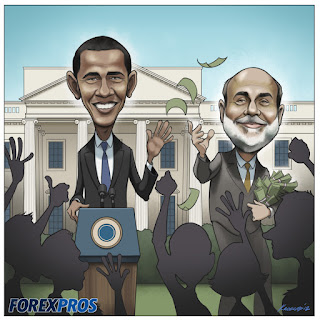 Soooo.  There was an election this week in the United States.  Anyone watch it?  In some ways it was pretty surprising and in others it was fairly predictable.  It's been interesting to listen to reaction and post-game analysis of the election and the various strategies employed therein.

This cartoon was commissioned by ForexPros in the wake of said election.  This week I was given both the subject matter and a rough idea of how I should draw it.  We never discuss what the cartoon is supposed to convey, really.  It's an interesting dynamic, as it means I have to create the cartoons with a fairly large blind spot.  Typically, the message being conveyed drives the cartoon.  At least, that's how I always did it.  It's possible this ambiguity is intentional.  Perhaps it's engineered that way in order to leave room for interpretation.  But I also think, to a certain extent, the cartoon suffers for it.  If the message is unclear it can lead to a somewhat muddy cartoon (conceptually).

For this one the message seems relatively straightforward: The reelection of Barack Obama means more stimulus money for all.  There's an insinuation of economic irresponsibility.  I disagree with this assumption, as things like TARP and Quantitative Easing were measures taken during the darkest times of the economic crisis.  And, given that the so called "Fiscal Cliff" is rapidly approaching, fiscal responsibility is top on everyone's priority list.

Here's the question for me: Is a cartoon, political or otherwise, SUPPOSED to be inaccurate?   Humor often comes from an exaggeration of reality.  For me to criticize a cartoon because it's a misinterpretation of reality is a little odd.  I never actually believed that John had a cat who ate lasagna or that Gary Larson saw cows howling at the moon or going to cocktail parties and then made cartoons out of them.  They were funny because they were far-fetched.  Is a political cartoon ultimately just a hyperbole-laced vehicle to start a political discussion?  Or does oversimplification of an issue only reinforce entrenched political positions and subsequently curtail discussion?

As always, I have no idea.  It's possible the answer is both.

As for the drawing, this one rocked.  It came together beautifully.  I think the likenesses are great and I'm happy with the composition and color.  I even finished in a mere 11 hours.  If you haven't noticed, I've also started playing with the size and proportion of the cartoons.  I was using standard paper proportions for the cartoons up until recently.  I had an epiphany that most people came to right away: On the internet, the size and proportions don't matter.  Standard paper size is actually pretty awful for most layouts.  So being able to change things up in that regard is fun and interesting.