Last week, Hurricane Sandy moved across the Eastern United States leaving large swaths of damage in its wake.  I was asked by ForexPros to create a comic about whether there was a possibility of a silver lining to what was dubbed "Frankenstorm" by some media outlets (I think Sandy was a combination of two weather events, plus it was Halloween).  Specifically, would the hurricane "wake up" markets that had been relatively flat for the last week?

My interpretation was a fairly predictable one.  Here's my excuse: Typically I'm just the guy pushing the pencil for Forex.  They give me a subject and how they want it depicted and I spend the next 12-14 hours making it happen.  This time I was told only the subject and given free reign to visualize it as I saw fit.  Because I knew the actual drawing process would take all day, I just didn't spend all that much time on the concept.  The longer I spent thinking about it, the less time I would have to spend crafting it.

That's not a great excuse, though.  The next time I'm asked to work out a solution to the subject matter  (this could be as soon as this Wednesday), I'm just going to try harder to come up with something awesome.  For me, the subject matter drives my excitement about the illustration itself.  The more I like the subject, the more excited I am about the process of drawing it.  Granted, the world of foreign exchange doesn't exactly turn my crank, but that's not a great excuse, either. 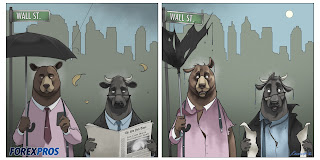 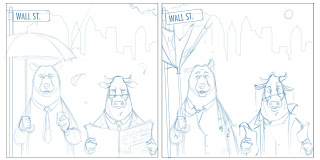