Going Off the Fiscall Cliff on a Crazy Train

Here's last week's comic illustration for ForexPros.  I was asked to draw Barack Obama looking over the fiscal cliff with a Congressman behind him attempting to break off the section of cliff on which President Obama was standing.  Below, I was supposed to show a bull, bear, and Ben Bernanke looking up.

This assignment gave me a little bit of trouble to compose.  The proportions of the comic, even upright, are pretty short to show a cliff.  But if I draw the cliff at the height I think it should be and draw the characters proportionally, the characters' faces would probably look too small.  So I compromised, choosing a combination of sizes/proportions that felt right.  The cliff, ultimately, is more of a tall ledge.  But I think it works.

Here's what I like about this illustration: The composition, the color, and the sign.  The sign is actually my favorite detail.  If it doesn't look familiar, it's based on a Forest Service sign.  You usually see these in front of a national park or wildlife refuge.  The graphic design of the Forest Service hasn't changed in about 50 years and the joy I get just by seeing one of those signs (both from the nostalgia, my love of the colors and fonts, and the fact that when I'm near one it usually means I get to play outside) is substantial.  I also like the idea that the Forest Service has designated a "recreation area" for the Fiscal Cliff.  It's a little added joke.

So, all in all, this turned out to be one of my favorite ForexPros comics.  So far. 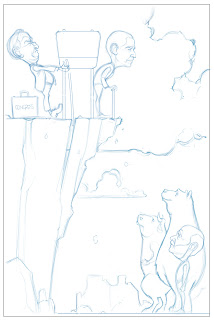 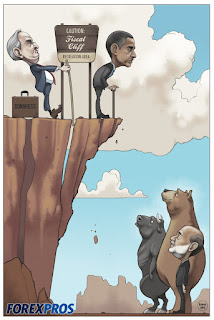