A quick post of this week's Forexpros comic.  The concept of this one (as always, conceived by staff at Forexpros) deals with the perception that the bull market is capable of overcoming even the most difficult of the current financial woes.

As far as the illustration is concerned, this one was quite a bit of work (12 hours in one day) for a result I think is only mildly successful.

What I don't like: The sound effect bubble in the middle panel.  I was going for a retro-comic look, but I think it just looks a cheesy.  Too clean, maybe.  Or too saturated.  Also, the framing seems a little claustrophobic.  But I'm limited to standard proportions and sometimes that just makes for awkward spacing.

What I like: The expression on the bear's face in the last panel, the dirt on his uniform and the scoreboard behind him. 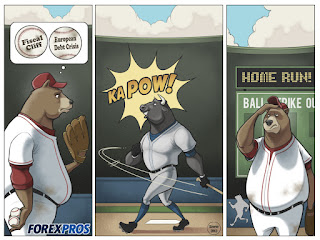