A Logical Case for Illustration

Last week, the good people over at Decagon Devices, Inc. asked if I would be up for something a little...different from their normal requests.  The illustration, requiring a relatively tight turnaround time, would be used in an upcoming video.  The subject?  "Vulcan Pirates Ransack Rome."  That was the description.  I was asked to come up with something based on that one, completely epic phrase.  Vulcan Pirates Ransack Rome.  Would I be interested?  Is Spock vulcan logical?  Affirmative.

Other than the phrase (which I assume is a mnemonic device for a tutorial), I was given no other guidance.  So, what came to mind when I envisioned Vulcan Pirates Ransacking Rome?  Well, my first instinct was to create an absolutely madcap illustration with explosions, people jumping through the air, sword fights, and anything you would generally associate with a melee.  But then I thought about the ones who were actually supposed to be doing the "ransacking": Vulcans.  Vulcans would never be disorderly.  Any task would be carried out intelligently, calmly, and above all, with precision and order (yeah, I actually gave it this much thought).  Even Vulcans who happened to be ransacking.  Even PIRATE Vulcans who happened to be ransacking.  So, as much fun as it would have been to draw that kind of chaos, I opted for a more accurate depiction of Vulcan Pirates Ransacking Rome.

My favorite details are: The nerve pinch being delivered to a Roman soldier (in spite of the fact the delivery Vulcan has a sword),  The bored expression on the face of the damsel, and the fact that, like everything else that's been ransacked, her dress is gold.

This is a great time to talk about the benefits of illustration.  Specifically: Specificity.  If you want a visual representation of just about any idea, product or concept that doesn't exist and you try to use clip art, stock illustration or stock photography, you're gonna have a bad time.  Illustration can visualize any idea, even one as far fetched as this one.  That's a powerful tool to have at your disposal because it can help convince a client, an audience or an investor.  You can describe your idea and you'll probably do a great job of it.  But even with a great description, there's no telling whether or not the picture in your head matches the one in your client's head.  If you utilize illustration you can show your audience exactly how your idea looks.  That makes your idea seem more real.  And that makes your idea more convincing.  That's one of the things I find so exciting about illustration. 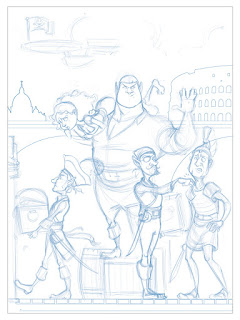 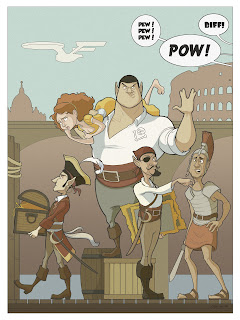