The Rajoy of Painting

Here's the ForexPros illustration/comic from October 3rd.  It deals with the possibility of another bailout for Spain's ailing economy.  The comic features Spain's Prime Minister, Mariano Rajoy, as Hamlet (credit for the idea belongs to the good people at ForexPros.  I was only the illustrator this time).

There are some days/weeks where drawing pictures comes as naturally to me as drawing breath.  The image composes itself in my head and it's as if I've simply photocopied the image from my head onto the page.  It's easy and fun and reinforces every choice I made to become an illustrator in the first place.

Last week was NOT one of those weeks.  Last week was the kind of week where every single line seems wrong, every choice is debated and every drawing is an exercise in anger management.  It's like forgetting how to walk and then overthinking it in an attempt to fix it.  I don't know why there are "on" and "off" days and weeks.  I suppose it's the nature of the beast.  The best I can do is to fight my way through these times and hope the lack of acuity doesn't show as much as I think it does. 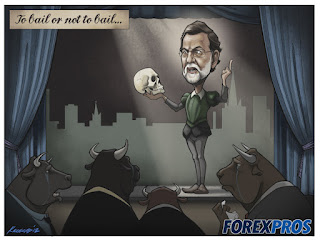