Can the title of a post about financial illustration be both germane to the subject matter and a blatant attempt at parasitic SEO by referencing a popular movie that has nothing whatever to do with said illustration?  We here at Noah Kroese Illustration say boldly: "Yes."

This week's comic for ForexPros deals with the waning optimism felt by foreign exchange traders with regards to the third round of quantitative easing.  The idea (once again authored by the good people at ForexPros) uses the metaphor of a hangover to describe the general feeling of pessimism and sober thinking after the financial panacea of the QE3 turns to placebo in people's minds.

In terms of the illustration: It went more smoothly than last week.  I felt more confident.  The drawing overall was less of a struggle.  And, in looking at the comic now (several days later), I don't hate it.  I think the drawing itself is sound.  I have a bit of a problem with the color.  There's more of it in greater saturation than usual.  Also, it seems to lack cohesion.  But that could just be me.  Sometimes, because I work on each element of an illustration separately, it's difficult for me to see the illustration as a single piece.  Instead, I end up seeing just a collection of subjects kind of glued together. 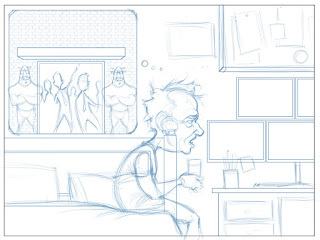 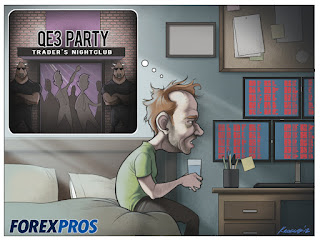 I'm also conflicted about the very comic-like proportioning of the people.  The big heads instantly signal comic status and humor.  But I always have trouble drawing people with such grotesque proportions.  When combined with my obsessive detail, I'm not sure if the result is something unique and interesting or just disturbing.

Ok.  I realize I haven't posted anything other than ForexPros comics in several weeks, but there's lots of stuff coming.  I promise.  I'm limited by when I can share certain projects, but I'll add more variety soon.