Financial Puns are a bankrupt kind of humor.

This week, the comic for ForexPros again stars head of the Fed, Ben Bernanke.  This time it focuses on the toll being taken on him as Chairman of the Federal Reserve.  I imagine it's taxing (heh heh...taxing) mentally, emotionally and, subsequently, physically.  Bernanke has seen some intense difficulties during his tenure and the stress involved must be awful.  Aside from President of the United States (or Secretary General of the UN), I can't really imagine a job I'd like less.

I was asked to depict Bernanke's transformation before, during and after holding the office in a timeline format (I was given the dates as well as the general layout/aesthetic of the comic).  Along with changing his hair, facial expression, and posture, I also used less and less saturated colors in his face, hair and clothing to give the sense of premature aging and fatigue.

This illustration went much more smoothly than the previous Forexpros comic.  That could have something to do with the fact that I've drawn Bernanke's face nine times to date.  It's pretty familiar territory at this point, though the illustration still took the better part of 12 hours.  But I like the result. 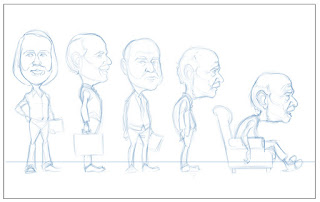 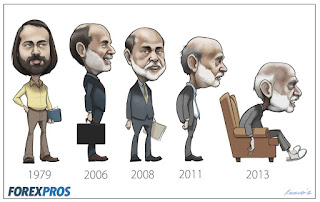