Video Games and the Euro

I know I owed you a Forex comic from last week, but there wasn't one.  I seriously considered posting a consolation illustration of some kind, but I figured the effort would have smacked of insincerity and I respect your intelligence enough not to patronize you with insincere posts on a blog about illustration.  Also  I didn't have anything to post.  I even looked for something old but didn't come up with anything.  I'll make it up to you this week, though.

So, here is last week's ForexPros comic (incidentally, posting last week's comics always makes me think of "The Pre-Taped Call In Show" from Mr. Show.  Recommended, if you haven't seen it).  The comic deals with a new effort by ECB President Mario Draghi to save the Euro with something that sounds to a financially uneducated illustrator like Quantitative Easing.  At any rate, much like the previous comic, I was given the subject matter and asked to compose the comic.

This one was pretty fun.  Being able to incorporate and pay tribute to a game that was a big part of my childhood was great.  It's an interesting exercise, however, when I'm referencing images or characters that already have a significant identity in peoples' minds.  This is something I used to do periodically in my political cartooning days, with mixed results.  I would often think or feel a certain way about an issue and then I would reference an image that, to me, had a similar emotional resonance.  But this backfired sometimes (I referenced the Mohammed Ali/Sonny Liston photo once and was accused, among other things, of being racist).  If something is too iconic, if the emotion of an image, for instance, is too deeply ingrained in us as a culture, re purposing said image will only make people reject it.  There's also the risk that an image will mean something different to different people.  Images have that power.  Two people might feel two completely different ways about the same image, so referencing that image toward a specific goal runs the risk of being wildly misinterpreted.

That analysis was probably way more than anyone was looking for on a Mario Draghi/video game mashup comic.  So, here's the TLDR: Images are tricky.  Vintage video games are fun.  I liked this comic lots.  It was fun to draw.  The saturation is way higher in this illustration, but it seemed like the right approach. 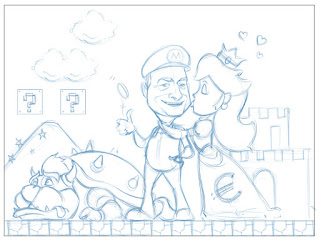 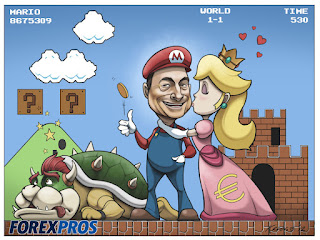