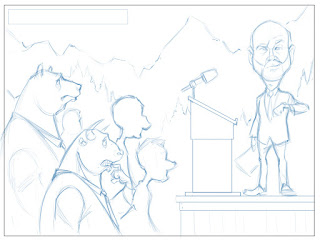 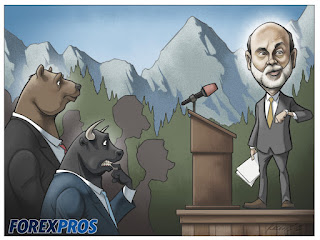 Hiya,
What yer a-lookin' at is actually last week's comic for ForexPros.  The subject of this one was the anticipation around Ben Bernanke's then upcoming speech in Jackson Hole, Wy.  Yes, those majestic mountains depicted in the background are based on the Grand Teton, the translation of which means rougly, "I'm a really lonely explorer and just about everything looks like a woman."
Unlike all of the past cartoons for Forex, for this one I was given only the subject and asked to come up with how to portray said subject on my own.  I didn't exactly go out on a limb, as you can see.  Portraying the markets as the bear and the bull is well-trodden territory, but: A.) How do you portray the markets, as complex as they are, in another way?  Drawing a Wall Street trader?  A guy in a business suit?  A graph with a face (man, that would be so bad it might actually be funny).  I think the bear and bull are probably still one of the better options.  B.) The bear and the bull are great characters.  We've (and by "we", I mean Americans) anthropomorphized both animals so extensively that stuffing them into suits and making them listen to Ben Bernanke talk about a possible third round of quantitative easing is fairly believable.  Both animals can be given eyebrows and human eyes and it still doesn't seem too far fetched.
This marks the fourth of fourteen cartoons that feature Mr. Bernanke, which is almost 30 percent.  I think I'm getting pretty good at drawing his face.

Ok, that's what I gots.  I will likely be working on the 15th ForexPros cartoon tomorrow, and I will do my best to post it relatively soon after I finish it.