Here's last week's comic for ForexPros.  It dealt with the release of the iphone 5 and the subsequent jump in Apple's stock to above the 700 mark.  As has been the protocol lately, I was given the topic on this one and asked to come up with some ideas.  This was chosen from perhaps a half dozen ideas.  Some good.  Some crap.

As per usual, my favorite of the ideas was not chosen.  It would have been a parody of the first "monolith" scene from "2001: A Space Odyssey".  The iphone 5 would have been the monolith with assorted primates gathered around doing assorted things that primates do.  I suspect it was not chosen because A.) This idea is a bit esoteric.  Not everyone's seen that movie and, B.) It maybe only kind of half way makes sense.  But the ideas that are esoteric or obscure and only bordering on sanity are the ones that appeal to me the most.  Such is life.

So, anyway, here's the idea that made the grade.  Things I like about it: Color (getting more comfortable with brighter colors, the apple as a helmet (the old-fashioned fishbowl kind), although it looks a little like the Bic pen mascot, and the light blue grid against the dark blue background.  Kinda Tron lookin'.

Things I don't like: The iphone is supposed to be a jetpack, but it doesn't have all the accoutrements of a jet pack.  It needed more fins or something, but I wasn't sure how to add them without making it look goofy (more goofy than, say, a guy with an iphone for a jetpack and an apple for a head).

All in all, I think this one was good. 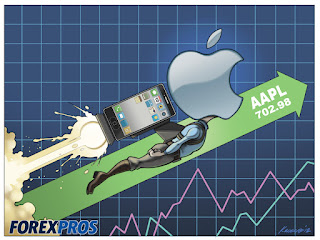 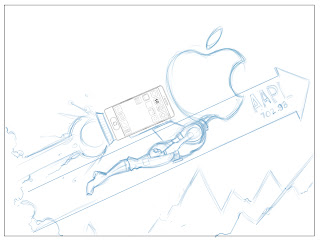